Jonas Knutsson
Flower In The Sky 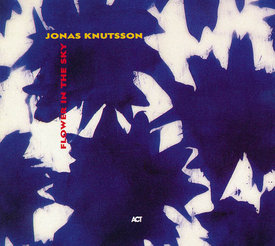 Flower In The Sky

Recorded (# 2 - 6) at Stockholm, September 1994
The other tracks recorded January and February 1992
Mastered by Radu Marinescu
Produced by Jonas Knutsson

Folk-Jazz from Sweden doesn’t only find friends in Scandinavia and isn’t all that new, either. Already in 1958, Quincy Jones let himself be encouraged during his work with the Swedish Radio Orchestra to write a Jazz arrangement of the Folksong ‘Ack Värmeland, du sköna’. Precisely this song was taken up again a good two years ago by Michael Gibbs for his project ‘Europeana Jazzphony No. 1’ (ACT 9220-2). From Sweden herself, the most important contribution came from Bengt Arne Wallin with his ‘Swedish Folk Modern’. Over the last years, the sextet of Swedes Ale Möller and Lena Willemark has caused a stir nationally and internationally thanks to their releases of improvised Folk (‘Nordan’ - Swedish Pop-Grammy and Award of the deutsche Schallplattenkritik; ‘Agram’, both on ECM). Last autumn, the band was celebrated at their only German live performance at the NDR-Studio in Hamburg-Rothenbaum, thanks also to the participation of contra-bassist Palle Danielsson and saxophonist Jonas Knutsson, the main protagonist of modern Folk-Jazz from Sweden.

Jonas Knutsson was introduced to Siegfried Loch by trombonist Nils Landgren (exclusive ACT-artist). ACT released the Jonas Knutsson Band’s version of the Folk-song ‘Polska efter Per Johan Arnström, Vithelmina’ on the 1996 sampler ‘A Little Magic In A Noisy World’ (ACT 9230-2). The feedback to this song was so lively that Siegfried Loch decided to issue a Best Of-compilation of both Jonas Knutsson’s own CDs which had appeared in Sweden on Caprice Records Stockholm. ‘Flower In the Sky’ shows the saxophonist’s (alto, soprano and baritone) whole range in eleven songs, six of which are from the album ‘Views’, which was awarded the Swedish Jazz-Grammy in 1992; five of which are from the six-piece Jonas Knutsson Band’s album ‘Lust’.Knutsson, born in 1965 in Umea, has played in various bands since 1980, from Folk, Pop-Rock (amongst others with Eric Gadd), Fusion (amongst others with Björn J:son Lindh) to Jazz. He started in the Jazz-Rock band Cabazz, until he decided upon a music degree at the Stockholm Konservatorium in 1983, playing with the band ‘Mynta’ and the Elise Einarsdotter Ensemble during his time there. He formed his first own bands ‘Encore’ and the World music band ‘Enteli’ in 1987 and 1989 respectively, which opened the way to a solo career and the Jonas Knutsson Band. Having been a member of Swedish backing-bands for Herbie Hancock, Pat Metheny, Clark Terry and Palle Mikkelborg underlined the fact that the time was ripe for the move onto the international stage. Extended tours of Europe, India, Singapore, Russia and the USA as well as an invitation to do four concerts in China bear witness to this. In 1996, the Swedish National Jazz Federation awarded him the ‘Jazzkannan’ award. In the projects of Ale Möller and Lena Willemark, Knutsson scored further successes in his endeavours to advance typical Swedish Jazz with its strong Folk accent. Mrs. Lena Willemark is the vocalist on the first English version of `Flower In The Sky - Caresstones’, a Jazz-ballad based on the poem by Icelander Matthias Johannessen.Suggested listening: the title-song, as well as the wistful ballad `Syskonöga’, `Polsquette, Grotesque, Saquette’ and `Polska efter Pekkos Per, Bingsjö’ because of the beautiful bagpipe-parts of keyboarder Mats Ölberg in an exciting dialogue with bassist Mikael Berglund; or `Arktis’ that relocates the listener, as it were, to an igloo. The CD closes in best Folk-Jazz tradition with `Hymn’.