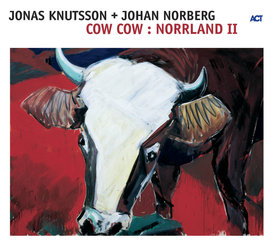 Saxophone and guitar - the intimacy of a duo by two accomplished musicians, a sensitive and lyrical dialogue, the evocation for our eyes and ears of an unobtrusive, softly-spoken vision of the landscape of the far north of Sweden.

Cow Cow: Norrland II by Jonas Knutsson und Johan Norberg follows on from its highly-praised predecessor  Norrland (ACT 9014-2) released in 2004, itself described as a "simple declaration of love by two musicians for their homeland" (Stereo).  "Has there ever been such a Nordic sound portrait with so much beauty?" asked the magazine Nordic Music. "No production of the recent past conveys the personal character, or allows the intimate stillness to shine through as Norrland" enthused  Jazzpodium, and Stereo continued rapturously: "Lucid in its performance, with sensitive and clear-as-a-bell dialogue, this formidable duo is able to create music as if from a different era".

"Music as if from a different era" - this is an equally good way of describing the atmosphere created on Norrland II even though there are only three traditional Swedish folk songs on this album: "Jämtpelle" and the two Polskas "Polska efter Jon-Marsen" and "Polska efter Gustav Persson".  The other pieces come from the timeless pens of Jonas Knutsson and Johan Norberg, and trigger longing, richly-coloured soundscapes to transport the listener not only to the cool white of north Sweden, but also to the depths of the musicians’ own souls.  Images of ice and snow are evoked in "Blåis", which translates to "very cold, hard ice", or in the two titles that are derived from the Sami language and the rich vocabulary Lappland’s ethnic minority has for different types of snow. While "Vahca" describes soft snow, so "Ruovvddetjarvva" describes a snow so hard that an elk can run on it.  Five further titles ("Klappmark", "Frostkåge", "Yttervik", "Myrheden", and "Byske") allude to the tiny villages in Lappland and describe the lives of the inhabitants of these remote districts.

These two famous Swedish musicians first met each other in 1999, playing together for the first time to create a uniquely homogeneous sound which merges jazz and Swedish folk idioms.

Guitarist Johan Norberg is currently regarded as the best and most interesting acoustic guitarist on the Scandinavian folk and world music scenes. For 17 years he played together with the trombone star Nils Landgren in the popular duo "Chapter Two" and also played electric guitar on Landgren’s live CD "5000 Miles" (ACT 9271-2).

Jonas Knutsson already proved himself to be a jazz musician with a strong awareness of Swedish folk idioms and a saxophonist with great lyrical qualities on the 1997 album "Flowers In The Sky" (ACT 9248-2).  Amongst others he has worked with the folk icon Lena Willemark, and collaborated with her in the pioneering folk-jazz group "Enteli" and later in the "Nordan" project, highly regarded from Europe to America.

For their second collaboration, Knutsson and Norberg have been inspired by "Cow Cow", a painting by the Munich painter Bernd Zimmer from the "Neue Wilde" ("New Wild") circle of German artists, which they discovered at the office of the record label ACT.  It inspired them and they asked for it to be the cover for their new album, which has the same "tenderness and nobility" (Jazzthing) as Norrland. The listener will be enthralled and touched in equal measures by its pure, simple beauty.