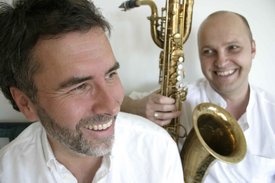 Johan Norberg, guitar
After two solo albums Johan is considered to be the number one acoustic guitar player in Scandinavia of today. With his own tuning in the Joni Mitchell/Michael Hedges tradition he has a unique sound that makes a perfect blend with Swedish folk-world music. As a part of the long time duo ”Chapter two” with Nils Landgren they have, during the past 20 years, made more than 300 concerts and sold more than 20.000 copies of their two albums.

He has also participated in various projects on electric guitar: Tim Hagans Quintet, Nils Landgren's Follow Your Heart and 5000 Miles (ACT 9271-2),The Swedish Radio Jazzgroup, Nils Landgren and Bengt-Arne Wallin’s Miles From Duke 1987 and at the ”Jazz Baltica”-Festival in 1997 as a member of the Maria Schneider big band. As a producer/sound-engineer he worked for Nils Landgren's Ballads (ACT 9268-2), Viktoria Tolstoy Shining On You (ACT 9701-2) and as a composer on the Rigmor Gustafsson album I Will Wait For You (ACT 9418-2).

Jonas Knutsson, saxophone
Starting as a jazz player Jonas early found inspiration in Swedish folk music. He soon teamed up with Lena Willemark to form ”Enteli”, a band that was pioneering in the field of jazz-folk music. Later, together with Lena and Ale Möller they launched the successful ”Nordan” project that has raised interest for Swedish folk/world music throughout Europe and the United States. With Ale Möller, he also formed the Stockholm Folk Big Band.

Besides touring and recording with his own quartet he is often seen on venues in France and is a part time member of Bertrand Renaudin’s “Turbulent Silence”. Ever since the release of his solo album Flower In The Sky (ACT 9248-2) people have recognized him as being one of the most original soloists in the new Nordic folk-jazz tradition.