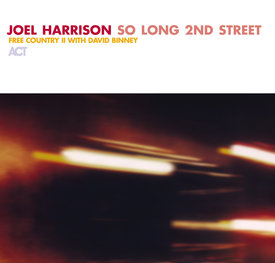 For his ACT debut CD "Free Country" (ACT 9419-2), Joel Harrison received a euphoric critical reaction. Joel, who was born in the Washington D.C. and has been living in New York since 1999, brought to classics such as Johnny Cash’s "I Walk The Line" a fresh and surprising reworking which moves between country, rock and jazz, making you forget all those Western-sounding clip-clopping cliches. Whereas in "Free Country" Harrison used a number of guest vocalists such as the multi-Grammy feted Norah Jones, this time, on the new album "So Long 2nd Street", he takes the lead vocal role himself. He combines songs and instrumentals in a unique way, for which there are no stylistic comparisons.

"A strong personal, intimate statement" is the way in which Harrison describes this CD: a "close-up" rather than a broad sweep, where a telescope is used to assess the horizon. He consolidates the concept of the previous release, by taking influences from all American musical styles from Miles Davis to Johnny Cash, where timeless, simple (vocal) melodies contrast with explosive instrumental interludes. A decision to concentrate on originals between traditional songs and borrowed pieces, as well as a focus on the unique voices of the original singers, songwriters and guitarists, makes "So Long 2nd Street" an even more radical, more intense album than "Free Country".

Harrison doesn’t have to hide his voice behind his technical ability as a guitarist. From the first bars of the first track one realizes that we are listening to a strong, raw voice full of character and soul. It’s especially notable in the title track, but equally on the traditional "I Am The Light Of This World" - with a backing choir, or in the exceptionally beautiful arrangements: tracks such as Joel Harrison’s own "Time Flies" have a deep uncategorisable intensity, liken a piece of "country chamber music". "Waterbound" (by David Binney and Joel Harrison) also demonstrates a trance-like, mysterious character.

The day book of a separation, "So Long 2nd Street", is placed next to a renewed spiritual "I’ll Fly Away". An instrumental meditation on mortality - "Oh Death" - follows a rhythmically flowing psychedelic anxious journey full of unexpected experiences, "White Line Fever". Here is a broad spectrum,12 tunes combined by Harrison in a way that lead organically from one atmosphere to the next, thus creating an enormously varied vocabulary. Not to be underestimated are the significant roles of David Binney’s saxophone and Gay Versace’s piano: this is contemporary, complex intense  jazz, songs which can be placed in a new context and yet never lose their magic.

The result is music which defies description. And, while Joel Harrison comes from both Country and Jazz, he nevertheless doesn’t want it to be categorised as "Country-Jazz". What the recordings on "So Long 2nd Street" show particularly clearly is a stylistic openness and cliche-free creativity, a flourish of rapid notes and the beauty of lyrical solos on National Steel Guitar, hymn-like gospel and laconic country, classic modern jazz piano sound and controlled ecstatic saxophone lines: all this is joined together seamlessly on this CD. Songs which break out from their usual meanings but never lose their magic as songs.

Diversity could never sound so homogeneous. It’s music of a strong personality- and that is shared even more effectively from track to track. Joel Harrison singular vision holds it all together.