Joachim Kühn
Out Of The Desert Live At Jazzfest Berlin 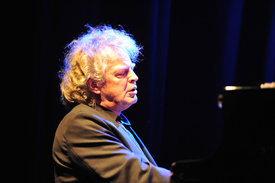 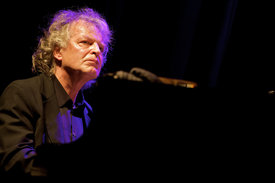 “Berlin is always something special,” says Joachim Kühn recalling his first performance at the Berliner Jazztage 1966 with his brother Rolf and the Mangelsdorff rhythm group. He sums up a career which took him straight from Berlin to the Newport Jazz Festival and later on to Paris, where together with Daniel Humair and Jean-François Jenny-Clark, he led one of the most defining trios of European jazz for decades. “Berlin was, at the time, a stepping stone for me into the big wide world of jazz.” After the fall of the Berlin Wall, he met Ornette Coleman in his home town of Leipzig of all places, and a musical friendship connected the two since then. Kühn has played, and continues to do so, with a long list of world famous colleagues although he himself is one of the few German jazz stars in the worldwide scheme of things. In June 2011 he won the Echo Jazz Lifetime Achievement Award (together with his brother Rolf).

“We had wanted to invite Joachim Kühn for a long time because he is one of the greats,” says Olaf Stötzler, manager of the hr Bigband (Frankfurt Radio Bigband). In 2009, together with Moroccan oud and guembri virtuoso Majid Bekkas and Spanish percussionist Ramon Lopez, Kühn recorded “Out of the Desert”, the follow-up to their celebrated debut “Kalimba” which was described as "pure magic" (Jazzthetik). “Out of the Desert”, praised for its “previously unheard sound” (Kulturspiegel) went on to win the German Record Critics Award. It was this “desert jazz”, which culminated in 2011 with the powerfully organic and incredibly intense “Chalaba”, that Stötzler suggested that Kühn transpose this to a greater dimension, that the trio’s African inspired improvisations should fuse with the diverse sound repertoire of the big band. Kühn was immediately taken with the idea of playing with the Frankfurter big band because, as he says, “they put their whole heart and soul in it.”

The premiere was in 2009 at the German Jazz Festival Frankfurt. The public celebrated the unique fusion and the Frankfurter Allgemeine newspaper raved, “there is only one way to describe it: a musical wonder.” The project had to be continued and the JazzFest Berlin was the ideal platform for this. On 6th November 2010 the trio met the hr Bigband once more and the concert was again a very special highlight. What the music critic of the Frankfurter Allgemeine had already heard at the premiere concert could now also be heard on the concert recording “Out Of the Desert live at JazzFest Berlin”.

Although the project has the same title as the 2009 CD, it doesn’t feature versions arranged for the big band but new compositions by Kühn, based on his experiences in the North African desert and with the musicians of the hr-Bigband in mind. “The way Tony Lakatos and Julian Argüelles play, for example, is world class, and guitarist Martin Scales and Axel Schlosser on the trumpet are also grandiose.” On "Out of the Desert live at JazzFest Berlin", the arabesque themes which Kühn had written for the band repeatedly give room for the improvisations of the trio, and they are as overwhelming as the outstanding soloists of the ensemble. “I’m interested in a big band not sounding like a big band,” says Kühn explaining the background to his arrangement. “It’s music with a bigger line up but not with the typical big band sound.”

Equally as fascinating is the intensity of the music – the inspiration appears real enough to grasp. “The previous evening I had played with Rabih Abou-Khalil in Lausanne,” recalls Kühn. “It was a strenuous journey and I hadn’t slept and was very tired. I had no time to think but this is usually very good for music” – as “Out of the Desert live at JazzFest Berlin” impressively shows