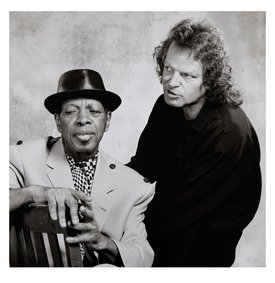 Mix and mastering by Klaus Scheuermann

Pianist Joachim Kühn is already a jazz legend within his own lifetime. But he is not one to rest on the laurels of his reputation or of his international success; he is still extraordinarily productive and active. Whether in his New Trio with Eric Schaefer and Chris Jennings, or in various other settings and guest appearances (with Archie Shepp, Pharoah Sanders, Michel Portal, Daniel Humair or his brother Rolf) or as a member of Emile Parisien’s Quintet, Kühn is still very much at the forefront of today’s jazz life. And considering the workload he takes on, it is hard to believe that he will soon be reaching the age of 75, on 15 March next year. As is to be expected, Kühn won’t be celebrating this occasion by putting his feet up on the sofa; he has a new project. And those who know him well will also not be surprised to hear that the centre of attention is not going to be Kühn himself. The spotlight will be on a much-missed colleague, friend, and his most important source of inspiration over the past few decades, Ornette Coleman.

When Coleman and Kühn first met in Paris in the early nineties, it was the beginning of a remarkable artistic relationship. Following their first duo concert in the vast arena in Verona in Italy, Kühn, 14 years younger than Coleman, became the only pianist with whom the saxophonist, noteworthy for his critical attitude to piano accompanists, would perform regularly in this setting. Later on he also followed Gerri Allen as the pianist in his quartet. "Ornette flew me from Ibiza to New York several times a year," Kühn recalls. "He rented a Steinway grand piano and we would play for a whole week, fourteen hours a day."

And the American jazz icon who died three years ago found a special way to single out the German for the very highest praise: "He doesn't come from jazz, he comes from music". What the two had in common above all was the fact that they understood the conventional harmonic systems (the well-tempered systems of classical music as well as jazz changes) to the point that they could see the limitations, and therefore went on to invent their own: Coleman had his "harmolodics", Kühn has his "diminished augmented system". So it was apposite that when Coleman met the Leipzig-raised Kühn, he should lead the German back to his very first formative musical influence, Johann Sebastian Bach. What happened was that Kühn performed one evening with Coleman and the next with his "Bach Now" project with the famous Thomanerchor Leipzig.

It is very fitting that Kühn should link his significant birthday with the great inspirer Ornette Coleman – and at the same time that he should want to add such a personal chapter to the current series of releases of unknown works by jazz legends. And the reasons become clear when he explains the background to the new album "Melodic Ornette Coleman": "From 1995 to 2000 I was able to play 16 concerts with Ornette. Before each concert, he wrote ten new songs, which we had worked out and recorded in his Harmolodic studio in Harlem for a whole week. Since he wanted me to supply the, as he called it, cards (sounds) for his melodies, I was directly involved in the composition process. After the concert, these pieces were never played again. Now I am the only one who has all the recordings and the sheet music of the 170 pieces. So now, after about twenty years, I have reassembled and recorded them for solo piano. Apart from 'Lonely Woman', none of these pieces was ever released by Ornette Coleman."

The Ornette Coleman whom we find in this recording is far more easily accessible than the free jazz firebrand of the early 1960s. Indeed, the jazz icon whose memory Kühn is serving here is the creator of colourful melodies with their roots in the blues. Of course, those colours are not exactly those that one might conventionally expect, and naturally also Kühn makes use of the material for his own purposes, for intuitive inspiration in the moment or to take us on his typically wild rides, but above all here are two soul-mates with a shared imperative to be creative in sound, and to use source material that is in its essence melodic. The melodies are sometimes earthy, almost traditional ("Lost Thoughts"), sometimes cheerfully playful ("Love Is Not Generous, Sex Belongs To Woman"), sometimes longing and melancholic ("Somewhere") or outraged ("The End Of The World").

Kühn rises to these challenges in the magnificent way that is usual for him, he brings that inimitable combination of the finest piano technique with a deep inner understanding of the structures of the pieces, plus the ability to bring shape to them in the moment. And it is evidently in the spirit of Coleman that Kühn should have chosen to record this album not in the studio, but in a haven where he could be unhurried and out of the fray, the music room at his home on Ibiza, and on his own Steinway grand piano. "In music, perfection is a killer," he likes to say, "I wanted the music to be pure, wanted to go deep into it." The result is jazz in progress. It an opportunity not just to celebrate the legacy of one of the most visionary instant composers, but also to honour one of the very greatest pianists.