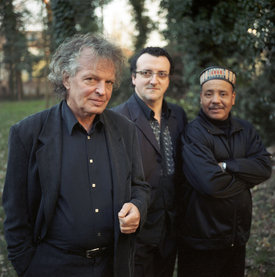 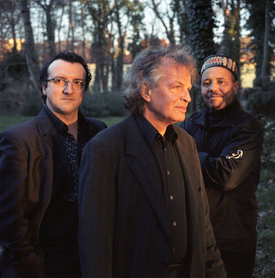 Recorded and mixed at Zerkall Studio on December 17–19, 2006 by Walter Quintus
Mastering by Klaus Scheuermann

The beach at Ibiza may be an inspiration in a number of different ways, one of them musical. Inspired, Joachim Kühn leaves the beach, goes home and sits down at the piano. From there, he calls Majid Bekkas, who is waiting for his luggage at Casablanca airport. Kühn plays him the song through the telephone. “We need some lyrics for this! You have to sing this." With his mobile still at his ear, Bekkas has his first ideas. The album opens with this telephone-piece: A Life Experience. Asked Where do you come from?, he sings: I’m a citizen of this world. All three of them are: Cosmopolitans and liberal minds, at once radical and open-minded. They are what the dictionary lists under kühn: “daredevil”, “headstrong”, “unusual”.

The Balearic Island of Ibiza – after Leipzig, Paris, LA, New York, and Hamburg Kühn’s current place of residence – is almost a geographical link between Europe and Africa: an extension of the mountains of Andalusia. Even in times like these, in which nothing seems impossible for musical cosmopolitans, bridge-building between cultures has almost become the norm, and even for a bandleader as well travelled as Kühn, the interaction with Bekkas and Lopez is a highly unusual one. “A Moroccan in between a Spaniard and an East German – that’s far out!”

Encounters with others are one of the driving forces of a creative person. Joachim Kühn has always looked for these encounters – and found them. The fruits of the most recent encounters are documented at Studio Zerkall, itself a venue for a number of encounters. A house in the woods, bordering on the Eifel national park, a place where the three musicians spend three days, living, laughing, drinking – and playing. For the pianist, Zerkall has become something of a symbol for the joy of experimenting – inseparable from the sound engineer/musician Walter Quintus, who has been a musical soul mate of the Leipzig-born pianist for decades.

Kühn and Bekkas met in the year 2003, also an encounter in the woods of the hinterland, this time in deepest Bavaria on Schloss Elmau - the location for the European Jazztival. They were curious about each other, and their curiosity prompted them to play. The occasion arose the following year: Bekkas, responsible for the Festival du Jazz aux Oudayas, invited the pianist to Rabat - like Elmau a venue for European jazz and intercontinental dialogue. Where the politicians – often unsuccessfully - try to broker deals, the musicians stop talking and play. This is where Bekkas got to know and understand a Louis Sclavis, Archie Shepp, Peter Brötzmann and Hamid Drake.

All three of the musicians are at once aware of their origins and willing to distance themselves from asphyxiating conventions. When Bekkas plays the guembri, a bass-like lute, he liberates it from its pentatonic existence. In the meantime, he is also experimenting with using four instead of the usual two strings. Ramon Lopez (not to be confused with Stan Kentons percussionist of the same name) also knows about imaginary and actual folk music, and about the infinite worlds that open up when one transcends tradition. Experienced in flamenco and Indian music, he has integrated the tabla, the cajon and other non-western instruments into his drum-set. He is a member of Kühn’s Iberia Trio and moves between contemporary jazz and free improvisation. A Spaniard from Alicante who lives in the one European city that has become a home to the sounds of the Maghreb more than any other, Paris.

The music we get to hear is a boiling and pulsating brew. It reminds Kühn and Bekkas of an experience they had, playing in a jail in Morocco, where the sheer liberating energy of their playing infected even this un-free auditorium. Above all though, this music breathes. Each of the musicians leaves space for himself and the others to breathe.

So here it is: the music of three men who contribute their life experiences, their stories and their history. Three men who interweave their tales, creating ever-new ones. Not those from 1001-Nights, no – the listener yearning for exoticism will be disappointed. This is the place to state one of the most ghastly yet appropriate truisms: Just call it music! As supple and universally applicable as this demand (very popular among musicians!) may be: Forget about ethno- or world-, the music we can witness here is jazz! The sound of this trio maybe far removed from the traditional piano trio, but its cultured playing, that celebrates the individual just as much as the collective, comes right out of that tradition. Musicians are aware of this example of an existing social utopia, even more so in these times of disquiet. Kühn: “We demonstrate that people from different cultures who hold different beliefs are approaching each other. As usual, it is the artists, who set an example. Dissonance does not exist. If it does, then as an intentional, positive one.”