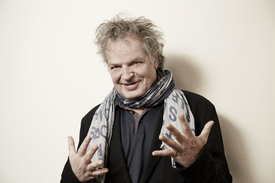 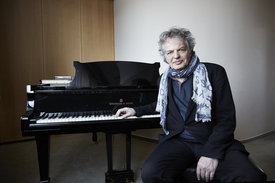 "Joachim Kühn has been a pioneering force and left a resounding mark on contemporary jazz. But despite this, the musical cosmopolitan Joachim Kühn remains committed to a contemporary sound in the tradition of jazz, and in the context of European concert music. He reveals vehemence and sensitivity, masterful technique and imagination, an unmistakable tonal touch and an unerring feel for dynamics. In the interplay with musical partners of many years' standing, in ever-changing and often unusually challenging playing constellations, and alone in his solo concerts, Joachim Kühn makes music an unforgettable event."

This is what the director of the JazzFest Berlin, Bert Noglik, wrote of Joachim Kühn around five years ago. And when the pianist celebrates his 70th birthday on 15 March this year, these words will still apply. The main reasons why Kühn is still Germany's only jazz pianist with a global voice are that he has always remained true to himself and has fixed points of reference, and because he has found his very own, inimitable style that transcends all categories, by trusting in formative influences and long-time companions.

Growing up in Leipzig, Kühn was inevitably exposed to that city's most famous musical son: Johann Sebastian Bach. Kühn grew up with him in the classical way and took piano lessons with the local musical director Arthur Schmidt-Elsey. Without ever forgetting this education, it was, however, not long before he gave into his natural curiosity and thirst for freedom and founded the Joachim Kühn Trio; at the time the only professional jazz group in East Germany. His elder brother Rolf, the clarinettist, had led him to jazz, and Joachim followed him to the West after a few years delay in 1966. Hardly had he arrived, the brothers founded the Rolf & Joachim Kühn quartet and played at the legendary Newport Jazz Festival and at the Berliner Jazztage.

Kühn made the best of his newfound freedom, immersing himself in the jazz scenes of Los Angeles, New York, Hamburg and Paris, in free jazz, in jazz rock and in world music, and the list of people he has performed with since then reads like a who's who of jazz - from Stan Getz, Joe Henderson, Michael Brecker to avant-gardists the likes of Don Cherry, Michel Portal, Jean Luc Ponty, Archie Shepp and recently Pharoah Sanders, through to young guns like Michael Wollny, and the Russian saxophonist Alexey Kruglov. With the "Bach Now!" project in 2002, he erected a musical monument to his first and constant inspiration, together with the St. Thomas Choir of Leipzig, by melding the Renaissance music of the old master with the language of jazz. Just as much as creative encounters with others are a constant of his creativity, so are the working bands he plays in with familiar confidantes: as the only European pianist the man has ever worked with (!), a long and close musical friendship links him to Ornette Coleman.

Together with Daniel Humair and Jean-François Jenny-Clark he formed one of the authoritative trios of European jazz for decades. The previously unreleased live concert recordings from the JazzFest Berlin that can be found on the "Birthday Edition" bring this exceptional trio back to life. After giving their first concerts in the 70s, these three then began to intensify their collaboration in 1984. They were received with particular enthusiasm in France: "Un trio explosif!" the press and fans acclaimed.

Listening to the 1987 recordings from the Berlin Philharmonie, it quickly becomes clear just what explosive power this formation had for the development of European jazz. Kühn, Humair and Jenny- Clark attain a level of ensemble playing that still today has no equal in terms of intensity and communication. Between freedom and down-to-earth compositions, the finest nuances and power play, with hot passion and cold calculation the trio builds up a jazz-musical tension that drives the audience through the extremes of emotion, to then release it in rapturous storms of exaltation.

Another constant in Joachim Kühn's work was and is Siggi Loch. He cast an eye on him very early on: "After a foray into the jazz rock world, Joachim impressed me with his return to his inimitable way of playing the piano. For that reason I considered him to be the next German after Klaus Doldinger who would be able to build a reputation in America as well, and I signed him up to Atlantic in the mid-70s. We managed to gain that renown to some extent, and then our paths separated. But I never lost sight of him. And then, when I founded ACT in the nineties, there was no doubt in my mind that Joachim had to be a part of our ACT family."

After years of pursuing different musical orientations, Kühn and Loch rejoined forces with a bang in 1994: The pianist was a key figure in the recordings of the jazz symphony "Europeana", still today one of the most outstanding recordings in the ACT catalogue. Alongside Kühn, the crème de la crème of contemporary European improvised music came together here, including Albert Mangelsdorff, Django Bates, Klaus Doldinger, Richard Galliano and many others, backed by the NDR Hannover Radio Philharmonic Orchestra. The album, which came out in 1995, and was arranged by Michael Gibbs, combines the rich European tradition of music with jazz. It not only won the annual award of the German Record Critics Award, it is also still Kühn's most successful release on the ACT label. So it only makes sense that this recording, which paved the way for his career since the start of the 90s, completes the "Birthday Edition" alongside the ground-breaking Trio Kühn, Humair, Jenny-Clark.

To this day, Kühn has remained true to his "Europeana" concept, which spans continents, ages, styles and personalities, on his solo, duet and trio albums of the past years. This is most notable with the now almost eight-year-old Wüstenjazz Trio, with the Moroccan guembri maestro Majid Bekkas and Spanish drummer Ramon Lopez, which shows that jazz is not a constricting corset for Kühn, but the global language of musical freedom.

So what does a hardcore musician, one who has won the German Record Critics Award several times, been attested the "Album of the Year" by international magazines, won two ECHO awards (with his brother Rolf for his life's work and for "Out Of The Desert Live" as the best big-band album), do on his 70th birthday? "I don't want a party. I'm going to go into the studio in Berlin. Alone, with Walter Quintus, who has been my sound man for decades. The next day my brother Rolf is coming. We're just going to record, without any plans. Occasions like that usually generate their own euphoria, and that is the best basis for a recording..." So you can see, there is a lot that we can continue to expect from Joachim Kühn.