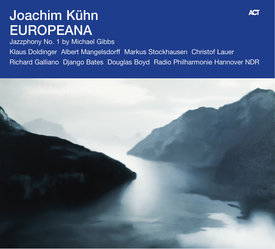 Producer’s note: "Folk music is a definite music form, a living phenomenon, created by real people, inherited and brought to perfection through generations, and still full of life even today." I remember reading this on a record by Bengt-Arne Wallin back in 1963. The thought never left me and I do believe we should not only respect our rich folklore heritage but put this music to the test of time and have our best contemporary artists help keep the tradition alive. This is what we were trying to achieve with "Europeana". – Siegfried Loch

When Siggi Loch launched ACT in 1990, he announced that the label would be dedicated to the production of multi-cultural recordings offering a challenge both to the performing artist and to the listener - "music", he said, "for people with open ears and open minds."

This album, like its predecessors, "Jazzpana" (ACT 9212-2) and "The African American Epic Suite" (ACT 9214-2), eloquently reflects those criteria. The combination of the rich and multi-faceted legacy of European folk music, the prodigious orchestrating skills of Michael Gibbs, the superb musicianship of the Hannover Radio Philharmonic Orchestra and the unique talents of some of Europe’s most distinguished jazz soloists has resulted in a marvellous musical collage which resists rigid classification.

On the foundation of some of the most enduring songs from the pantheon of European musical folklore, Gibbs has built an edifice which embodies elements of symphonic music, swing, free jazz, blues and flamenco. He calls it his JAZZPHONY NO.1. If there has to be a category for this production, let’s just call it "beautiful music".

Michael Gibbs, who was born in Salisbury, Southern Rhodesia, (now Harare, Zimbabwe), on September 27th, 1937, studied piano from the age of seven and took up trombone at the age of 17. Five years later, he departed for the United States to study at the Berklee School of Music in Boston, from which he graduated in arranging and composition in 1962. During his time at Berklee - in the summer of 1961 - he won a full scholarship to the Lenox School of Jazz where he studied with Gunther Schuller, George Russell and J.J.Johnson. In 1963 he graduated from the Boston Conservatory of Music with a Bachelor of Music degree and subsequently studied at Tanglewood Summer School with Aaron Copland, lannis Xenakis, Gunther Schuller and Lukas Foss.

In September 1962, Gibbs made his recording debut as arranger for a Gary Burton group which included Clark Terry, Phil Woods, Tommy Flanagan and Joe Morello and since then his composing and arranging output has been prolific and enormously diverse.

He has worked in a wide variety of musical contexts, composing and arranging music for films, television, ballet, symphony orchestras and jazz and popular music record sessions (with, among others, Stan Getz, Joni Mitchell, Peter Gabriel, John McLaughlin, Stanley Clarke, Jaco Pastorius, Sister Sledge and Whitney Houston) . Without question, Michael Gibbs is one of today’s most imaginative and versatile arrangers, ranking in stature, though so far not, it must unhappily be said, in public acclaim, with the late Gil Evans, one of his principal early influences, along with Oliver Messiaen and Charles Ives.

Siggi Loch first had the idea of commissioning Gibbs to orchestrate a selection of European folk songs some considerable time ago but, because of Gibbs’ busy schedule, it was only last September that the project came to fruition. The session also achieved the first musical collaboration between Gibbs and Joachim Kühn, who had long wanted to work together.

Joachim Kühn, from Leipzig, is a piano virtuoso who has been a major figure on the jazz scene for more than three decades, working mostly either solo, in duo with Jenny-Clark and in a trio setting with the addition of drummer Daniel Humair. Says Kühn: "Michael did a hell of a job, successfully bringing together the three elements - the folk music repertoire, the symphony orchestra and the jazz trio with soloists. I liked the idea from the start, even though it was a departure from the musical area in which I normally work. But the discipline involved in following the orchestral arrangements was, in fact, a creative element. I’m very glad I was a part of this production. lt was also a great advantage to be able to work with Jean François Jenny-Clark. He has been my bass player for 29 years, but he still does things which surprise me!"

A measure of Gibbs’ commitment and professionalism is that, before setting out to write the orchestrations, he made a trip to Bochum last July to hear Kühn perform a solo concert in order to get a more detailed grasp of the pianist’s work. And Gibbs told me that some of the writing, notably on the French song, "Crebe De Chet", was inspired by elements in Kühn’s distinctive piano style.

The wealth of Gibbs’ experience is well in evidence on this album. His orchestrations are consistently resourceful and imaginative, making creative use of tempo variations, innovative voicings - including some most effective dissonance - and contrasts in mood. And his writing for strings is exemplary, especially compelling on "Black Is The Colour", "She Moved Through The Fair" and "Londonderry Air", on which latter tune the harmonies are most appealingly reworked.

Joachim Kühn is the principal soloist on the album, sensitively varying his approach to achieve compatibility with the mood of the arrangement, from his straight-ahead, percussive, loping-tempoed solo on the intriguing "Crebe De Chet", through the dazzling pyrotechnics of "The Shepherd Of Breton", the delicate, and largely restrained work on the unmistakably Nordic "Midnight Sun", and the delightfully skittish outing on "Heaven Has Created", to the most appealing variations on the melody of "Londonderry Air". He gets splendid support throughout from Jenny-Clark and Jon Christensen.

There are outstanding contributions from the other soloists - the flawless oboe work of Douglas Boyd (Chamber Orchestra of Europe) on "Black Is The Colour" together with the warm-toned and nimble tenor horn of Django Bates ; the quixotic trombone of Albert Mangelsdorff on "Three Angels"; the haunting, pure-toned fluegelhorn of Markus Stockhausen on "Stevtone"; the keening, bluesinflected soprano saxophone of Klaus Doldinger on "She Moved Through The Fair"; the lyrical saxophone of Christof Lauer on "The Groom’s Sister" and "Three Angels", and the accordion work of Richard Galliano on "The Shephard Of Breton".

As well as being a showcase for the inspired orchestral writing of Michael Gibbs, "Europeana" provides yet further testimony to the oustanding musical talent to be found in Europe. And there could, after all, be no finer way to salute the folk music heritage of eight European countries than by having these superlative arrangements played by some of the finest musicians in Europe - from Britain, France, Germany and Norway.