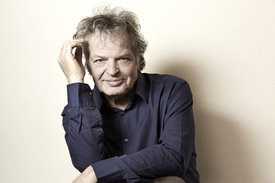 Joachim Kühn, born 15 March 1944 in Leipzig, is one of the few global German jazz stars. His piano playing defies categorisation and has blazed new trails for contemporary jazz. The musical citizen of the world Kühn considers himself bound to the jazz tradition, linked to European concert music, but most of all dedicated to a sound that is now. He reveals vehemence and sensitivity, masterful technique and imagination, an unmistakable feel for his keyboard and an unfailing sense of dynamics. Whether in the interplay with long-standing musician partners, in ever changing and often extraordinarily challenging band constellations or alone in his solo gigs, Joachim Kühn succeeds in making music an event.

Kühn has been leaving his mark on the international jazz scene since the 60s. As a 22 year-old, he took part in an international competition for young jazz musicians, and decided not to return to socialist East Germany. Instead he launched a global career. That same year his first album came out on the renowned label Impulse, after playing at the Newport Jazz Festival in the USA.

Since then he has played in often challenging constellations with musicians from all over the world, with the most diverse of musical backgrounds. He worked with distinguished free jazz exponents like Archie Shepp and Ornette Coleman, and with musicians the likes of Billy Cobham, Eddie Gomez, Michael Brecker and Joe Henderson in the 70s fusion scene of the American west coast. Then he formed an internationally leading piano trio in the 80s in Paris with the bassist Jean-François Jenny-Clark and the drummer Daniel Humair.

Just two years after the founding of ACT, he was the focal point of an all-star band in 1994, with, for example, Alfred Mangelsdorff, Klaus Doldinger, Django Bates and the Hannover Radio Philharmonic Orchestra. The large-scale manifesto that arose of a Europe-based jazz music "Europeana" also reflects Kühn's musical influences: Although dedicated to a contemporary jazz sound, he has always felt a connection to European concert music as well.

The genre-crossing concept is especially apparent in his solo playing, which has always been important to Joachim Kühn – and to a degree the true challenge among jazz pianists. So it is that on the solo album "Allegro Vivace" released by ACT in 2005, his own pieces are accompanied by compositions from Bach and Mozart, Coltrane and Coleman. This merging of such musical contrasts again illustrates Joachim Kühn's risk affinity and talent for improvisation.

He shows his virtuosity in duets as well, always with an attentive ear for his partner so they can interact on an equal footing. His collaborations with the up-and-coming pianist Michael Wollny ("Piano Works IX: Live at Schloss Elmau", 2009), the grandmaster of sax Heinz Sauer ("If (Blue) Then (Blue)", 2010) and Archie Shepp ("Wo!man", 2010 on Archieball) were all highly praised by critics. The former was even named Album of the Year by the French jazz magazine Jazzman.

His openness and spirit of discovery led Kühn to put together a trio, the likes of which had never been seen before. In 2003 he found two kindred spirits with regard to the desire to improvise, in the Moroccan Majid Bekkas, who plays the lute instruments guembri and oud, and the Spanish percussionist Ramon Lopez. And they brought with them their own cultural backgrounds and musical experiences. Their first album "Kalimba" in 2007 was followed by "Out Of The Desert" (2009), which was recorded in a session in the northern African desert with local musicians, and by "Chalaba" in 2011.

Considering this abundance of musical pioneers, international collaborations, and his for German jazz unparalleled status, it came as no surprise when Joachim Kühn was honoured with the ECHO Jazz for lifetime achievement in 2011, together with his brother Rolf. The second ECHO Jazz followed one year later. The collaboration of his "desert jazz" trio with the hr big band, "Out of the Desert live at Jazzfest Berlin", was distinguished as the Best Big Band Production.

On "Voodoo Sense", the fifth album with Majid Bekkas and Ramon Lopez, Kühn's respect for tradition is audible. Already the nearly 20-minute opener "Kulu Se Mama" – recorded together with Archie Shepp, a group of African percussionists and vocalists led by talking-drum maestro Kouassi Bessan Joseph – refers back to the Coltrane album of the same name from 1965. Whether with archaic world-music, the blues-soaked saxophone ballad "L’eternal Voyage" written especially for Shepp, studies of pianistic harmonics such as "Crossing The Mirror" or thundering drama such as the final piece "Firehorse" – with a little help from his friends, Kühn has once again taken another step in his search for the magic of his very own music, the Voodoo Sense as it were.

When Joachim Kühn celebrates his 70th birthday on 15 March 2014, he can look back on an amazing career as a pianist. But he wouldn't be Joachim Kühn if he wasn't still making new plans for the future.