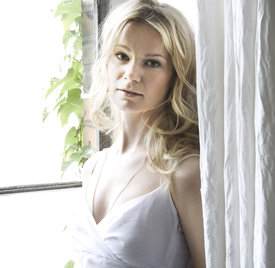 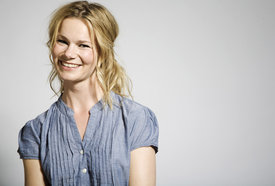 Produced and mixed at Krubaston by Johan Norberg, 2010
Mastered by Klaus Scheuermann

Her voice is soulful, luminous and warm, yet reserved and capable of the finest nuances – as heard on Swedish singer Jessica Pilnäs’ new album “Bitter And Sweet”. The seemingly endless pool of fine Scandinavian singers naturally comes to mind but this time the comparison is not quite so simple. Some career paths aren’t so straightforward, even in Sweden, and Jessica Pilnäs is such a case.

The 31-year-old grew up with music, and has been singing all her life: her father played the keyboard in Sweden’s favourite pop group, the “Sven-Ingvars”. In 1995, when Pilnäs was only 16-years-old, she ended up in the pre-selection of the Eurovision Song Contest, one of her country’s most popular television shows. She came third and was immediately offered a record contract. But Jessica had other things in mind at the time, aside from a career as a pop starlet: “I was so young and had just started college which I wanted to finish properly.” So instead of signing the record deal she concentrated on her studies, went to school and then to the renowned Fridhem Jazz School at which many of Sweden’s modern jazz greats also studied.

With a sound education, 20-year-old Pilnäs then became a member of the internationally successful R&B band “Robyn”. Once again she caught the attention of the pop producers and this time she couldn’t resist the temptation. She recorded the album “Pretender” under the pseudonym “Isa” - her label, Sony, had given her the name because “there were too many Jessica’s around at the time,” she explains. The album sold particularly well in Japan but Pilnäs soon realised that being told what to do by others, geared towards promotions and singing on playback was far removed from doing what she really wanted to. “That wasn’t me. I no longer felt comfortable dancing around like other pop singers in music videos. I was so disappointed with the music industry and tired of all the pressure which killed off the fun.” She quit the music business and put her back-up plan into action which was to complete her medical studies at Sweden’s most renowned university – the Nobel Prize institution, the Karolinska Institute.

It is possible that Jessica Pilnäs could have totally succumbed to the medical profession had it not been for two musicians who thought her retreat from the music world was a great loss for jazz. Star trombonist Nils Landgren tried to get her to sing on numerous occasions whilst she was still studying. For his ABBA project 2003 he recorded a duet version of “The Winner Takes It All” with her which was later released on the “Magic Nordic Voices” (ACT 9718-2) album. Then in June of the same year, Landgren, Wolfgang Haffner, Dan Berglund, Jesper Nordenstadt and others recorded Viktoria Tolstoy’s ACT debut “Shining On You” (ACT 9701-2) in ABBA’s legendary Polar Studios, and also accompanied Pilnäs on five songs which can now be found on “Bitter And Sweet”. In 2008 Landgren asked her to participate in his second “Christmas With My Friends” project (ACT 9476-2) which she both recorded and toured through Sweden and Germany.

Guitarist and producer Johan Norberg, particularly popular in Germany as the partner of Jonas Knutsson with the duo “Norrland”, is the second decisive figure in her career development. He was a member of the band that accompanied Jessica Pilnäs’ Isa alias on its Japan tour in 2000. He was so impressed by her talent that he wrote a song for her as soon as he returned and got her to come to the studio. “The More I See”, which was initially presented by Rigmor Gustafsson on “I Will Wait For You” (ACT 9418-2), is about love’s awakening. Both realised that it reflected their relationship and from, that point, they became a couple and are now married.

All these points along her personal and musical development are reflected in “Bitter And Sweet”. “I consciously chose this type of compilation. Before I could do something totally new I had to bring the past to a good end and present what had grown here and been made with great love. It’s a kind of diary.” Of course, it features “The More I See” which was the starting point of Pilnäs’ jazz work, so to speak, as well as “The Winner Takes It All” which is very typical Jessica’s tendency to go against the grain, bringing songs down to the essentials and giving them the finest phrasing and expression with a peaceful jazzy flow.

“Many female Swedish singers try to sing as high as possible. I do almost the opposite, I try to make everything as simple and as deep as possible,” she says explaining her approach. This can be heard in her reinterpretations, recorded especially for this album, of “Don’t Dream It’s Over” by New Zealand songwriter Neil Finn and the Billie Holliday classic “Don’t Explain”, as well as in the Norberg/Pilnäs compositions “Just Not Today”, “Man In A Balloon” and “Bitter And Sweet”.

Pilnäs’ affinity to pop becomes evident on her reinterpretations of Simon & Garfunkel’s “Bridge Over Troubled Water” and “There Must Be An Angel” by Eurythmics, which stem from the magnificent Polar Studio session, as does the title track “Bitter And Sweet”. “There are so many good pop songs, it would be a shame if they were forgotten and simply disappeared. I chose a few so that I could reinterpret them and then present a new version to the public.”

As a qualified doctor, Jessica Pilnäs has a backup plan, just in case. At the moment however, music comes first. “During the past few years I had this increasing longing for music. The joy in singing came back more and more and I’m happy that I am now able to meet the public and play live. I really want my musical career to take off again.” And as listeners of “Bitter And Sweet”, we can only look forward to this, and to future works that may result from her unusual career.