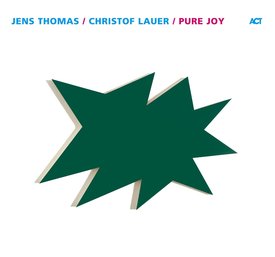 They were one of Europe’s jazz sensations in 2001. Their debut duo-CD "Shadows in the Rain" (ACT 9297-2) was hailed by the press as "one of the most beautiful and exciting CDs" of the year. Saxophonist Christof Lauer and pianist Jens Thomas interpreted songs from pop star Sting with a tempestuous beauty, paraphrasing such popular themes as "Every Breath You Take" and "Roxanne", and instilling in them an almost "jazz chamber-music"  quality. On their new CD, "Pure Joy", all the compositions come from Lauer and Thomas.

The things that listeners treasured on the duo’s debut album are once again on display on this CD: the concise, catchy melodies over piano ostinatos - the dynamic flexibility between smooth, sensitive changes and laceratingly explosive energy -  the gripping,  iridescently expressive tonal shadings of Lauer’s saxophone tone sound - the unadorned directness of Jens Thomas’s sharply contoured playing - and the confident interaction of a duo that can blend together and take off together. Some of the compositions, such as the beginning number and album title from Jens Thomas, or Christof Lauer’s counter-piece, "Pure Purple", belong to the most direct and at the same time finest compositions you can find in today’s jazz.

"Be Yourself" - this composition by Jens Thomas could be used as this recording’s motto. It’s clear that these two musicians don’t need to rely on the melodies of Sting or any other song-peddler. They had already shown that with three original pieces on "Shadows In The Rain", with compositions that were in every way at least as strong as the pop songs; and here they make it even more obvious. One sensed that they "borrowed" Sting’s songs to use as catalysts for their own style. And they were defined as such: " Simple, compact compositions, such as you rarely hear in jazz" (Christof Lauer) as a basis for close-meshed playing, free of any jazz dogma. Lauer said that already at their first meeting both he and Jens Thomas had this ideal in mind. The ideal is played out on "Pure Joy" - wild, tender, refined, original, brilliant.

Lauer was born in 1953, and since the eighties has been an outstanding soloist on the European scene, perennially playing with such all-stars as Albert Mangelsdorff and Heinz Sauer, along with being a longtime member of the United Jazz and Rock Ensemble. He calls the around 20 year younger Jens Thomas his "dream partner", a musician with "Unbelievable ears, and a unique piano stile full of hidden surprises". Two years ago Thomas was one of the "shooting stars" of European jazz, winning several prizes with his CD "You Can’t Keep a Good Cowboy Down" (ACT 9273-2), which interpreted compositions from film music composer Ennio Morricone. He commented exuberantly about this new duo project: "Look for the connections, use the differences, and like children see a star rise". - that’s the thrill and the "Joy" of it.

It’s a joy that is communicated and transferred to the listener within the first few bars. You won’t miss either Sting or Morricone. Rather, you will find all that more of two succinct voices of contemporary jazz - Lauer and Thomas. It’s pure joy.