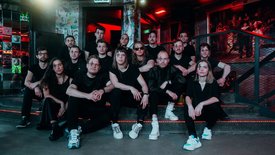 Recorded by Josy Friebel from May to September 2021 at Harry Klein, Munich
Produced, directed and mixed by Roman Sladek
Mastered by Klaus Scheuermann

Jazz meets techno meets big band. It really shouldn't work...and yet, as anyone who has ever heard or seen the Jazzrausch Bigband will know, the reality of the band in action firmly knocks that idea on the head. Ever since Jazzrausch started in 2014, it has been on an unstoppable path of growth and development which has been very much on the band’s own terms. Jazzrausch first came to attention as the house band at the legendary Munich techno club "Harry Klein" – currently threatened with closure, incidentally – where the recordings for the new album "Emergenz" were made. Since then, the band’s growing renown has taken it to Germany’s great temples of classical music: the Elbphilharmonie in Hamburg, the Isarphilharmonie in Muich and the Berlin Philharmonie... and a buzz has been building internationally too. What is Jazzrausch Bigband all about? Putting a couple of exceptional and unconventional musical brains in charge, letting their sense of what is serious and what is banging prevail, and then seeing how much it can appeal to both younger and older audiences. Jazzrausch has dealt with the whole idea of ‘no can do’. By hitting it out of the ballpark.

The fact that Jazzrausch works so well is attributable to three factors which have remained constant. First there is Roman Sladek: this bandleader/organiser/mover/shaker is a strong-toned, and classically-trained trombonist...who also has a background in heavy metal. Second, there is composer/ electronic musician Leonhard Kuhn: the fact that Jazzrausch Bigband also functions like a classical orchestra is down to him. Each "season" they devote themselves to one or more new themes. They take a classical composer like Beethoven, Bruckner or Shostakovich, or they put their minds to trends in philosophy, literature or the natural sciences. Or they’ll concoct a swinging Christmas programme, and (as happened with one project) they’ll completely turn their backs on techno. None of this would be possible without the thirty or so musicians who make up the Jazzrausch Big Band. Each of them is a genuine and individual character with a clear identity, stage personality and her or his uniquely diverse musical background.

The theme of the new album is "Emergenz" (emergence), a term from philosophy and systems theory which describes new properties which occur in a system as a result of the interaction of its individual elements. It serves well as a metaphor for Jazzrausch Bigband, a living and constantly changing organism. Comparing "Emergenz" with earlier albums, what is most striking is how the band's expressive palette has become even more differentiated and refined. The moments when the energy levels are at their highest are still dominated by techno jazz, which is only to be expected. But, in between, the regular four-on-the-floor pulse of the bass drum is increasingly frequently suspended, so there are sections where the forward momentum comes from intricate interlocked horn parts, or just from voices. Influences from minimal music and bouncy drum'n'bass are audible too. Fragments from poems by Gertrude Stein ("Go!Go!Go!", "Present Tense") are present, as is the music of Wayne Shorter ("Orbits"). On "As Darkness Fell“, the Armenian-born trumpeter Angela Avetisyan whispers of a time when things became quiet and no music could be heard. The ballad "Five Dice" tells the true story of a woman who, after separating from her partner, keeps five dice as a memento of him. The nervously upbeat "Ticking Time Bomb" describes the feeling of being overwhelmed by one's own feelings and thoughts, and almost bursting out of oneself as a result of a sheer overload of impressions.

Of course it is of some help to be aware of all of these factors which have influenced the lives and thought processes of the participants. But, in the end, there is really only one way to get to the bottom of the Jazzrausch Big Band phenomenon, and the fascination and success which there clearly is around it. And that is to hear their music first-hand, to be affected, touched and inspired by it. The different external factors unite organically, and what emerges is completely new and utterly compelling. This is music which takes hold of the listener’s heart and head. Say it again: it really shouldn’t work. But it truly, definitely does.