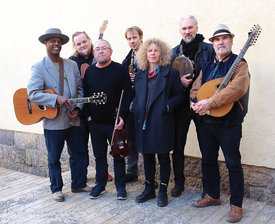 The concert series “Jazz at Berlin Philharmonic” has set itself the ambition to reflect current developments and shifts in jazz, and in European jazz in particular, ever since it started. A new configuration of musicians is assembled for each concert, the focus is placed on a different theme, and the results have invariably been truly memorable one-off concerts. At the beginning, this approach might have seemed something of a risk, but the idea has evolved to the point where it has been described by Berlin’s respected regional broadcaster RBB as “a successful formula for delivering very great concerts.” “Celtic Roots” was another in this line of triumphs; success has evidently now become a matter of habit.

This concert re-traced the paths taken by Celtic music as it traversed European culture, and also charted its influence on jazz. Modern Celtic music in all its depth and breadth has a continuous tradition which manifestly pre-dates the nineties wave of world music and ethno-music. Turning the clock back again, jazz had also been influenced by folk music long before the revivals of the sixties and seventies. Following the waves of emigration from Ireland and Scotland in the nineteenth century, elements of Celtic music were present in the origins of American country music and of the blues, above all in the southern states of the US, but also later in New York.

For this particular journey by “Jazz at Berlin Philharmonic,” most of the participants would not necessarily count themselves as jazz musicians. Moreover, the fact that “Celtic Roots” was brought into being under the aegis of Scandinavian artists was also clearly intentional, because the recent history of their music is so permeated by the rediscovery of their own folk heritage, which then led them naturally to the absorption of other traditions.

Track by track, this illustrious group of quite exceptional performers finds myriad ways for tradition and innovation to coalesce, right from the first chant of the bagpipes in Fraser Fifield's “Psalm.” “Willie Murray’s Reel” is given a wholly new character with a fascinating range of guitar sounds. “Lament For The Children” is turned into a multilayered and constantly changing improvisation. “St. James Infirmary” has a truly Celtic final section, and comes across with a new vigour and forcefulness. It is in moments like this that the excitement of the Berlin audience in the hall come through palpably to the listener of the CD.

In addition to the buzz of the occasion, it becomes clear that the shrewd gamble behind this “Celtic Roots” concert has paid off - again. The virtues of “Jazz at Berlin Philharmonic” are a spirit of musical freedom and the sheer joy of collective musicmaking at the highest level. In combination, they are an irresistible force.