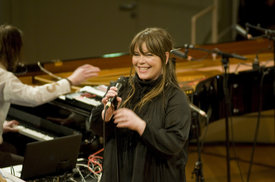 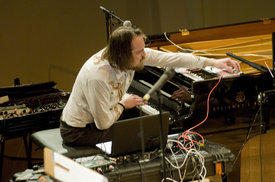 A blues guitar introduces the melody, restrained, elegiac and yet full of energy. A clear, female voice takes over, its power potentiated by its uncanny serenity. A piano gathers together the theme one more time before all of them, joined by an additional trio, take it through a mightily dynamic loop until it tapers out almost to nothing in the end. "Ingen Vinner Frem Til Den Evige Ro" is the name of the old Norwegian church song that Knut Reiersrud, Solveig Slettahjell, Bugge Wesseltoft and In The Country transform so fascinatingly into a modern Nordic hymn in the sold-out Chamber Music Hall of the Berlin Philharmonie.

It was another one of those magic moments that the "Jazz at Berlin Philharmonic" series so reliably produces. Founded in 2012 and curated by Siggi Loch, the idea was to craft inimitable evenings by means of thematic concentration, but most of all with stirring, often first-time encounters between outstanding musicians. Such were the first concert in December 2012, also available on CD, with the magical trio of pianists Michael Wollny, Leszek Możdżer and Iiro Rantala, and this fourth evening entitled "Norwegian Woods". The recordings were initially designed to be documentations for radio, but the musical result was so convincing that the artists themselves wanted to publish it on CD. Only the input from Mathias Eick could not be used, for legal reasons.

The live recording shows as if under a magnifying glass, not only as described above, how a country with only five million inhabitants was able to become the epicentre of European jazz, and dispose over one of the most exciting jazz scenes in the world – and that far away from the established centres of jazz. One of the reasons is the interweaving of their own roots: Norwegian folk music and classical works ranging from Johann Nesenus to Edvard Grieg. This wasn't the intention at first, but the land of the fjords was simply too far off the beaten tour track of American jazz musicians, and that ended up helping to develop an own vocabulary – the typical "Nordic sound" as was made popular by Jan Garbarek et. al. in the early seventies, and that is today something like the DNA of Norwegian jazz.

The second key to success is the almost unconditional receptiveness to all kinds of influences. In the relatively small Norwegian music scene, jazzers have no qualms about working with classical musicians or those from the pop and rock genres, something that could be seen compellingly in the "Norwegian Woods" collaboration. Naturalness and lyrical composure on the one hand and eruptions and artistic expression on the other characterise the voice of the evening's musical focus, that of Solveig Slettahjell. The inventor of vocal deceleration and essentialisation employs all that and more in her version of Tom Waits' "Take It With Me".

In doing so she is supported by her partner of many years from Slettahjell's Slow Motion Quintet, Morton Qvenild. This ingenious universalist of young Norwegian jazz has already tried everything out; from pop to metal. But since 2003 his trio In The Country, with drummer Pål Hausken and bassist Roger Arntzen has been the undisputed leading force. The structural principles practiced here – soundscapes grow into finely differentiated dialogues, mighty domes of sound evolve into pastel chamber-jazz or electronically embellished sound pictures – come into their own on "Norwegian Woods", especially in "Can I Come Home Now".

Pianist Bugge Wesseltoft, just turned 50, is one of the pioneers of the young Norwegian jazz generation, and he represents the two most important directions of modern Norwegian jazz, both dated 1997. With "It’s Snowing On My Piano" Wesseltoft showed his contemplative side, perfecting the elegiac Norwegian jazz on a radically reduced, timeless solo-piano Christmas album (the biggest-selling ACT album to date, with more than 120,000 copies sold). At the same time, with his "New Conception of Jazz" he turned his attentions to things electronic, with the ground-breaking new approach of including contemporary pop elements from deep house, ambient music, drum’n’bass, big beat, soul and funk. On "Norwegian Woods" he illustrates just how fascinatingly he has developed both aspects, for example with the lyrical solo "Chicken Feathers" and the dramatically dazzling jam version of John Hiatt's rock classic "Have A Little Faith".

And finally there is guitarist Knut Reiersrud, the oldest, most travelled and yet here least well known of this JABP edition. His playing field is the blues, which Buddy Guy and Otis Rush introduced him to in the USA at the tender age of 18. Since then he has played with stars the likes of Dr. John, Joe Cocker, Stevie Ray Vaughn and Five Blind Boys of Alabama. But if Reiersrud weren't a Norwegian, he wouldn't have that longing for his native sound traditions alongside the American blues legacy, or that insatiable curiosity for other spheres that led him to spend time in Africa, India, Nepal and Iran. His JABP solo "Jargo" is the best proof of this.

Norwegian individualists present themselves as a close-knit group at this singular fourth "Jazz at Berlin Philharmonic"; and their country as still the spearhead of European jazz, which has long since emancipated itself from the motherland USA and launched decisive developments of its own.