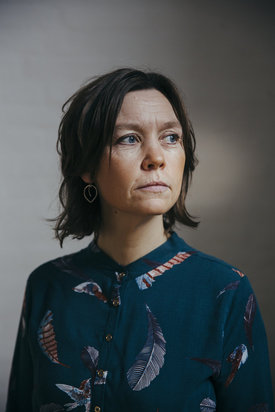 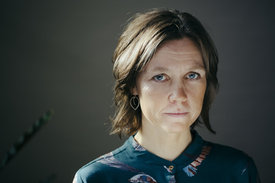 Janne Mark writes hymns. And yet there is nothing about her that is stuck in a fusty tradition. She writes in the here and now, she is socially aware and committed, and in her work she draws on the freedom of jazz and all of the breadth of the Scandinavian folk tradition. And that is how her songs have established their place outside the canon of sacred music and in the secular space. As she explains herself, “the music of ‘Pilgrim’ is written for people who are unfamiliar with the church as well as for those who know it well.”

The music of the Christian church and jazz have always been closely related. Spirituals and then gospel music were both a fertile nurturing ground for jazz and an important source of inspiration. Janne Mark has enlisted the participation of Norwegian trumpeter Arve Henriksen. Henriksen is an important figure in Nordic jazz, and is also known for his work with Lars Danielsson on projects such as the “Liberetto” albums. Henriksen’s unique flute-like trumpet sound with all its emotion and expressiveness fits in superbly. In fact Mark had wanted to incorporate it into her music for a long time. “Arve’s sound reaches into the deepest layers of human existence,” she says. “When I first heard it, it affected me so completely and totally, I knew I had to follow the path of that sound.”

Danish hymns are unique. The works of Denmark’s greatest hymn writer N.F.S Grundtvig (1783-1872) have a resonance which reaches well beyond the confines of Denmark. Within the heritage of Scandinavian song, they are a constituent part which is very much alive. Like Grundtvig, Janne Mark grew up in Jutland, but she has spent most of her adult working life in Copenhagen. The Danish hymn tradition is agrarian. Most hymns were written in the countryside where the majority of Danes used to live, but Mark incorporates the urban space into her hymn-writing more than any other modern practitioner, and has found a unique way to reinvent the Danish hymn-writing tradition. Indeed she has been described as being like a musical cornflower at the hub of the city.

Since 2000, Mark has been singing in the Brorsons Church, in the centre of Copenhagen. It is in a neighbourhood teeming with different cultures, and where the media has been known to report clashes between local gangs. And yet the church serves as a sanctuary amid this commotion, and also happens to stand right next to the cemetery where two of Denmark’s most prolific writers are buried, the philosopher Søren Kierkegaard and the writer of fairy tales Hans Christian Andersen. This is a place from which Janne Mark derives strong creative inspiration.

In traditional hymns, the lyricist and the composer are different people, and the role of the music is to express the words with straightforward intensity. As lyricist, composer and singer, Janne Mark has a different approach: “For me,” she explains, “the melody almost always emerges before the lyrics, often accompanied by the first line, an idea for a title or some other bit of text that provides either a melodic and rhythmic impetus.” She finds inspiration in many different places – her local community in Copenhagen, literature and music. Her music emanates from a person who listens to herself, to others and to God; all of that can be heard in it. Perhaps the best way to understand Janne Mark’s hymns is as one long prayer for more light in the darkness. She writes about creating light for those who have lost their way, and also about letting a light shine on the shadowy regions of the soul. And it is as if Janne Mark uses both her words and her lingering notes to send light from the serenity of the church and out into life with all its cracks and imperfections.

“Pilgrim" is an engaging and thoughtful album with plenty in it to discover. It is a haven of peace and quiet in a world beset with restlessness and uncertainty. It is also the portrait of a fascinating artist who is little known as yet outside Denmark. Janne Mark has embarked upon a path between hymns, songwriting, folk and jazz, and has done so with great success.