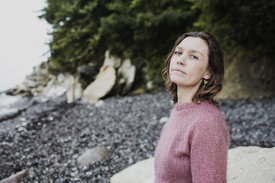 Janne Mark writes hymns. And yet there is nothing about her that is stuck in a fusty tradition. She writes in the here and now, she is socially aware and committed, and in her work she draws on the freedom of jazz and all of the breadth of the Scandinavian folk tradition. And that is how her songs have established their place outside the canon of sacred music and in the secular space. Bute she is not only a gifted composer and lyricist, Mark is also an affecting singer. Since 2000, Mark has been singing in the Brorsons Church, in the centre of Copenhagen.

Janne Mark is a fascinating artist who has embarked upon a path between hymns, songwriting, folk and jazz, and has done so with great success. In doing so she has found a unique way to reinvent the Danish hymn-writing tradition.

With this second release on ACT singer, songwriter and hymnist Janne Mark presents a kaleidoscopic travelogue from her pilgrimages in life and art. KONTINENT is a soaring departure from PILGRIM (2018) and documents the expanding collaboration with musical miracle worker Arve Henriksen.

KONTINENT affirms Janne Mark’s position as a strong voice in contemporary hymn writing and as a sculpturer chiselling out melodies from the bedrock beneath her. The world she creates for herself on KONTINENT contains as diverse elements as the melodies of the northern Atlantic folk music tradition, Danish author Naja Marie Aidt’s poem from the novel When Death Takes Something From You Give It Back and the spellbinding 7th-century celtic lullaby Taladh Chriosta and they sit comfortably among the hymns and clear-cut melodies of the artist herself. And melody is essential to her:

“I am fascinated by the borderlessness that melody represents. Melodies, when shared among people in communal singing especially, disregard borders and fringes, and have a way of finding a path of their own”.

The trademark tranquility that attracted audiences and critics alike to PILGRIM is fused with a productive playfullness. Arve Henriksen is omnipresent as a trumpet soloist and co-producer. His songlike phrasing flickers like a firefly around the beacon-like vocals of Mark, who in turn graces us with sky-reaching outbursts. As on Kingsfold, the symphonic fusion of harmonium, mellotron, grand piano, gushing march drums and Henriksens seven-piece horn arrangements, all created spontaneously in the studio. Or on Both In The World And Yet Outside It, which in its bold minimalism leaves space for drummer and sonic shaman Bjørn Heebøll, who is making a most welcome ACT debut and is a new collaborator in the terrain of Janne Mark.

The album was recorded in the Spring of 2020 in a safe haven of creation during the global state of emergency. Nils Økland weaves himself in and out of the album with his mesmerizing hardangerfele, a Norwegian violin instrument with resonant strings, somewhat reminiscent of the Shruti boxes of the Indian subcontinent. Long-time collaborators Henrik Gunde and Esben Eyermann complete the line-up.