Not only a talented sound engineer,
but also a guitar virtuoso. 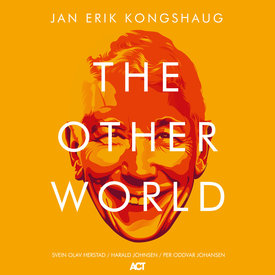 The CD „The Other World“, Kongshaugs first album, was released 20 years ago. Due to his 75th birthday it is, for the first time ever, being delivered as a vinyl limited edition.

"Recorded At Rainbow Studio, Oslo. Engineer: Jan Erik Kongshaug." These credits on a CD-cover are nowadays a symbol of pristine and top quality Jazz and Folk recordings, with the highest level of sound.

After years of being a freelancer at the New York Power Plant Station, Jan Kongshaug started to build his own empire in Oslo in the year 1983. At that time there was no studio in Norway that could properly record acoustic jazz.  The Rainbow Studios were born, which developed itself to be the most desirable address for high class recordings, even reaching a legendary status. In terms of quality of sound, dynamics and spatiality, there is no equal. ACT has also recorded many impressive Jazz productions at his studio: Bugge Wesseltofts “It`s Snowing On My Piano“ and his duo project with Henning Kraggerud “Last Spring“, “Layers Of Light“ by Esbjörn Svensson and Nils Landgren, the Sting project “Shadows In The Rain“ by Christof Lauer with Jens Thomas and last year „Oslo“ by the Michael Wollny Trio.

Only a few people outside of Norway know that Kongshaug was making a living as a musician long before he became a sound technician. Due to this engagement he had little time to perform and record his own music, so it wasn’t until 1998 that he decided to put together a group and record some of his own compositions. Although Kongshaug has been involved with many of the jazz greats of the last thirty years, he chose some "young lions" from the Norwegian scene to work with him. Jan Erik commented: "These musicians are world-class. Drummer Per Oddvar Johansen has been on several sessions with various groups at Rainbow studio over the last few years and I’ve always been amazed by his playing. I’ve known bassist Harald Johnsen for over a year now. I first heard pianist Svein Olav Herstad a few months before we did the recording date. The three of them were playing at a local dub, and I really enjoyed their way of playing together. Soon after that, they came into the studio to record a trio album, and it was then I decided that it was the right time to record my own album and that these were the right musicians to record with. Their playing is inspiring - they’re young enough to be my sons, and they push me. It’s a good feeling. They were simply the perfect group for me."

He showed great sense, because now, 20 years later, these partners have grown to be desirable Scandinavian Jazz musicians: the drummer Per Oddvar Johansen became part of the Helge Lien Trio, the bass player Harald Johnsen is a longtime member of the Tord Gustavsson Trio and the pianist Svein Olav Herstad is achieving his goals with other formations.

Jan Erik Kongshaug has earned his place as one of the great recording engineers in jazz. With this CD he presents himself as an outstanding music-composer and raises this "Other World" of his onto the public horizon.