Jan Erik Kongshaug
The Other World 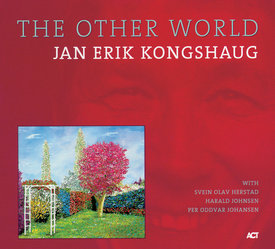 Jan Erik Kongshaug is one of a handful of recording engineers whose name and work over the years has earned the respect and admiration of musicians and discerning jazz connoisseurs the world over. His work with Manfred Eicher of ECM records is memorable, and Kongshaug is now one of the most requested sound engineers in jazz. With the recording of his first CD at the age of fifty-four, Kongshaug is revealing to the jazz world that he is also a superb musician and composer.

Jan Erik was born into a musical environment. His father was a well known guitarist in Norway, while his mother was a professional singer. When Jan Erik was seven, he began playing accordion; around the age of 14, he picked up the guitar. By the early 60’s his inauences counted the likes of Barney Kessel, Wes Montgomery, and Kenny Burrell. After graduating from high school, Kongshaug began to study electrical engineering. He found himself gravitating towards sound engineering, and was soon working at the Arne Bendiksen Studio in Oslo. In 1970, ECM head Manfred Eicher came to Oslo to make a recording at the Bindiksen Studio with Jan Garbarek. Jan Erik Kongshaug was the recording engineer. The resulting album, "Afric Pepperbird", was the beginning of a continuing musical relationship that has spanned almost thirty years.

In 1978 Kongshaug started a five year period of freelancing. He began Aying to the States for three or four days every month to work as sound and mixing engineer at the legendary Power Station studio in New York City. His work there secured his place as one of the best and most sought-after engineers in the business. However, Jan Erik’s home and family were in Norway. At that time there was no studio in Norway that could properly record acoustic jazz. Jan Erik decided to set up a studio of his own. With the help of Manfred Eicher, Rainbow Studios was born. "Without Manfred’s help," says Jan Erik, "it would have been impossible to set up. I owe him a lot for that." Rainbow Studio is now one of the most celebrated studios in the world. The distinct musical vision that Eicher and Kongshaug developed has come to be known simply as the "ECM sound". Such a creative symbiotic relationship between producer and engineer hadn’t existed in jazz since the historic work of recording engineer Rudy Van Gelder in the 50’s and 60’s, first with Bob Weinstock of Prestige, then with Blue Note’s Alfred Lyon, and later with Creed Taylor and Bob Thiele of Impulse. Likewise, many of the over 400 albums produced by Eicher and recorded by Kongshaug have become jazz classia.

Over the years Jan Erik has continued to work as a musician, doing occasional dub dates, studio sessions, and playing in a variety of groups, but it wasn’t until 1998 that he decided to put together a group and record some of his own compositions. Although Kongshaug has been involved with many of the jazz greats of the last thirty years, he chose some "young lions" com the Norwegian scene to work with him. Jan Erik commented: "These musicians are world-class. Drummer Per Oddvar Johansen has been on several sessions with various groups at Rainbow studio over the last few years and I’ve always been amazed by his playing. I’ve known bassist Harald Johnsen for over a year now. I first heard pianist Svein Olav Herstad a few months before we did the recording date. The three of them were playing at a local dub, and I really enjoyed their way of playing together. Soon after that, they came into the studio to record a trio album, and it was then I decided that it was the right time to record my own album and that these were the right musicians to record with. Their playing is inspiring - they’re young enough to be my sons, and they push me. It’s a good feeling. They were simply the perfect group for me."

The success of this recording is due in part to the cohesion of a working trio composed of world-class musicians and Kongshaug’s perception that they would fit with his music and musical direction. It is also due to his understanding of group dynamics; Jan Erik makes an attempt to present himself as featured soloist, but, instead allows everyone to have his space and place within the music.

The compositions on this CD now through the mainstream of modern music without being confined to it. The musicians play with intensity and passionate intelligence. The recording quality is masterful. Besides six Kongshaug originals, there are two standards and two "jazz standards": The musical spectrum shifts from a bluesy-boppish rendition of "lf I should Loose You", through a swinging up-tempo version of the Sonny Rollins classic, "Airegin", to a sizzling, virtuoso excursion into the world of Latin jazz with Kongshaug’s "Na Name Samba", and ends with Jan Erik’s beautiful, reflective ballad "When I Met You".

Jan Erik Kongshaug has earned his place as one of the great recording engineers in jazz. With this CD he presents himself as an outstanding musician-composer and raises this "Other World" of his onto the public horizon.