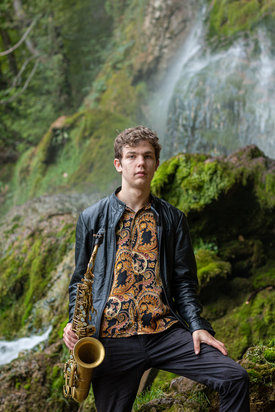 Cover art by Mimmo Paladino, by kind permission of the artist

The audience at the Biberach Jazz Prize a couple of years ago witnessed a miracle. Here was an alto saxophonist who instantly evoked memories of some of the very greats of the instrument: a player with the melodic invention of a Johnny Hodges, the big sound of an Eric Dolphy, the urgency of a Cannonball Adderley, the funkiness of a David Sanborn, plus his own definite touch of individuality. But here’s the surprise: this was no hardened journeyman, Jakob Manz was a mere sixteen years old. And, as was to be expected, this young musician from Dettingen near Stuttgart with his quartet The Jakob Manz Project not only won the audience award, he was also named the overall winner of the competition by a jury chaired by eminent bassist Dieter Ilg. Six months later, Jakob Manz achieved distinction again with a win at the Leverkusener Jazztage’s future.sounds competition.

In the years before he won these two prizes, Manz had garnered support from some prominent people and organisations: while still at school he was accepted into the German Federal Jazz Orchestra (BuJazzo) where there was already quite a buzz about him. He attended the Stuttgart Musikhochschule(music academy) as a junior student and caught the attention of some shrewd professors such as Christian Weidner ("Jakob throws himself into the music with every sinew"), Klaus Graf ("He has extraordinary musicality, has a great blues feeling and an amazing understanding of harmony") and above all Wolfgang Schmid, one of Germany’s most influential jazz electric bassists, and a long-standing member of Klaus Doldinger’s Passport, who invited Manz to do gigs with him. In the meantime Manz has also played alongside Randy Brecker, Ack van Rooyen and most recently Wolfgang Dauner. In what seems a natural progression, Jakob Manz's debut album "Natural Energy" is a "Young German Jazz" release. This latest development sees Manz following in the lineage of Michael Wollny, Roman and Julian Wasserfuhr and Matthias Schriefl. All of these established artists released their first albums as part of ACT’s series representing the younger generation of German jazz musicians.

"Natural Energy", then, is the first tangible evidence of a quite exceptional talent. Jakob Manz did have the advantage of being well nurtured from an early stage. He grew up as the son of an opera singer and a music teacher. He learned to play the drums at the age of five, the recorder at eight, and soon afterwards the saxophone.

"It was through playing the recorder that I discovered my passion for jazz," he says. "What I started to feel was a freedom that could make me very strong in the moment, not thinking forwards, not thinking back, just concentrating on what I'm doing.” Before long Manz was winning awards from both "Jugend musiziert" and "Jugend jazzt". Like most young musicians today, he has a spirit of curiosity and a completely open mind to all kinds of music: "For me, good music is not defined by its style, it depends on the quality of a piece." As an example, the phenomenal feeling he has for playing mainstream jazz can be seen in a stunning flugelhorn-alto sax duet feature with Ack van Rooyen and the SWR Big Band which is available on YouTube.

He is comfortable in that context – to say the least! – but jazz with groove and soul is his genuine passion. And he had the good fortune to find some kindred spirits early on, people just as talented as he is, and more or less of the same generation: Hannes Stollsteimer on piano, Frieder Klein on bass and Paul Albrecht on drums are the musicians who inspire and lift him in the Jakob Manz Project. The assuredness of this group is jaw-dropping. With astonishing power, finesse and creativity, strong instincts for melody, rhythm and catchy hooks, these four youngsters set about their work on "Natural Energy" in the spirit of the Brecker Brothers or the Crusaders. The listener picks up hints of Marcus Miller, Christian Scott and even Bill Evans, and yet they play exclusively their own compositions. In the opener "Endless Space”, the way the tempo is set by a driven by bass and drum-driven groove and the whirling solos is irresistible, as are the funk feel and the earworm-ish motifs of "Eyes Of Crystals". "Paul's Vision" has a rock drive about it, and the Latin rhythms of "Eyes Up" are a delight. The wonderfully expressive ballads on the album are impressive too: in "Soft Like Peanut Butter" and "Engaged", the saxophone truly takes wing. And there is a coalescence of the gentle and the energetic in the anthemic closing section of "How High Is The Sky".

"Natural Energy" reveals not just dazzling virtuosity but also burning conviction and compositional maturity. It is safe to predict that we will be hearing a lot more from Jakob Manz.