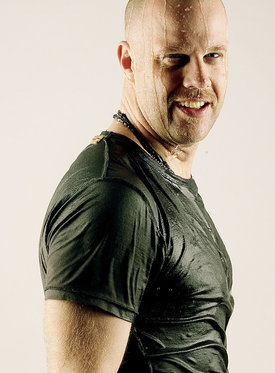 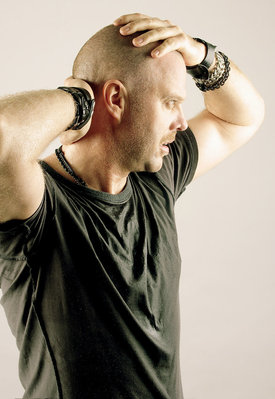 ‘Rammstein? I take that as a compliment!’ Jacob Karlzon laughs when one mentions the wonderful, often surprising, worlds of sound which he creates. Not in an ironical fashion, on the contrary. He is even delighted. Thus he laughs out loud and heartily, like only a man of his format can laugh – very loud indeed. ‘Even as child I listened to a lot of metal and electro. Although this type of music is nothing for pianists, its transported energy is, in fact, important. To listen to music that one does not make oneself opens up totally new horizons.’

Certainly, Jacob Karlzon’s horizons are wide. This pianist, who was named jazz musician of the year in his native Sweden in 2010 and who became internationally renowned for his long running collaboration with singer Viktoria Tolstoy, loves to work with extremes. This starts with his instrument whose emotional breadth ranges from fragile gentleness to a sense of mighty awe.

‘I came to jazz because I was really excited to engage in the spontaneity which is involved in playing improvised music. When I realized that improvisation above all is direct communication with the audience it really gripped me. This sheer delight and fun made me desire for more and more.’ And so Jacob Karlzon creates wonderful, large musical images with his tunes and sounds. He achieves this by employing his very own means of creation, and these are truly astounding: His music reveals brilliant technique in his play and brilliant play with his technique.

Besides instrumental ability, a great imagination for modern sounds characterizes Karlzon’s music. He calls it “technorganic” or also “acoustic but electric”. But these are really only means of expression; they are not an end in itself. The “jeans and boots guy” wants to tell stories of experience and dreams; he reveals something of himself, of his delight in music and performance. He does not want to deliver merely technically brilliant fireworks, even though, of course, he delivers these too on his new album “More”, - his ninth CD and the first on the German label ACT.

Together with his JK3 members, Hans Andersson on bass and Jonas Holgersson on drums, Jacob Karlzon creates soundscapes of marvelous power and intensity.

Each of the eleven tracks on the new album offers new facets, yet Karlzon never looses himself in detail. The restless first piece, “Running”, opens up the scene which ranges from hints of metal-type sounds (“Dirty” and the KoRn cover “Here to Stay”), to the spheric-balladesque (“Nilha”, “Between Us”) and complex rhythms (“Departure” and “Epiphany”), to the final track “Rhododendron Rites” with its almost classical resonances.

Various sounds and structures, all of which develop something of a song character, harmoniously work alongside each other. This includes the cover of Nick Kershaw’s hit “the Riddle” which, at first glance, certainly seems to be the most unusual piece in the album. Here Jacob Karlzon playfully integrates Swedish folk elements in his work whereby he weaves individual motifs in seemingly dream-walking fashion into some highly virtuoso solo passages.

What Jacob Karlzon develops in “More” is warm, lively and inviting, and at the same time surprising, floating and enthralling. At the beginning of each song we do not quite know where the journey will take us. What is certain, however, is that each journey in itself opens up new horizons. ‘I write and perform music like a soundtrack so as to capture and describe atmospheres and feelings. This is a very important element for me in music. Already as a child I loved to run around and let the experience of the scenery around me be underlined by listening to my walkman. What Jacob Karlzon develops from these sceneries is music for the inner film; great “head-cinema” which integrates all genres, senses and emotions. More is hardly possible.