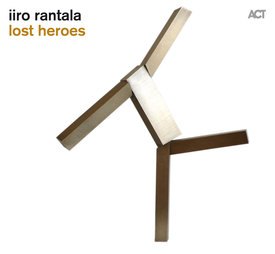 Vinyl mastering by Thorsten Wyk, exclusively made from the 24bit studio master files

Until now his name has been mainly associated with Trio Töykeät, one of the wildest, funniest and most visionary piano trios in the international jazz scene. Finnish pianist Iiro Rantala explored all possibilities of this classic line up – sometimes the ferocious player with boundless energy, other times the sensitive romantic or burlesque joker. His playing exceeded stylistic boundaries and was as uncompromising as it was entertaining, yet was always held together by the combination of limitless technique, a sense of humour and unmistakable good taste - qualities which Rantala preserved even after he dissolved Trio Töykeät in 2006. “My goodness! We’ve been doing this for 18 years now and given thousands of concerts. It’s time for a break,” he said at the time, choosing to concentrate on “Iiro at large” – his own show on Finnish television which can still be seen today – and his solo career.

His unaccompanied work should certainly take off now, as Rantala enters with Lost Heroes, as a new and exclusive ACT artist. The remarkable league of the label’s pianists has been strengthened in the last two years by exceptional talents such as Vijay Iyer, Vladislav Sendecki, Danilo Rea and Gwilym Simcock; no other label has such a large pool of creative piano solo talents to offer. Yet Rantala’s solo debut stands out even in this imposing family: the idea of Lost Heroes in itself, of having tributes for his musical role models and kindred spirits, is probably unique, particularly in it is accomplished. “At a concert in Cologne I played a song dedicated to Pekka Pohjola. Siggi Loch was also there and came to me later and said, ‘Why don’t we continue this idea?’ I was immediately inspired by his suggestion as, for some time, I was also unable to get Esbjörn Svensson out of my head and I also wanted to dedicate a song to him. After we had thought about it a bit longer, we soon got together all my heroes. Erroll Garner, for example, was Siggi Loch’s suggestion and Luciano Pavarotti was mine.”

Jean Sibelius, Finland’s national classical hero, is of course amongst those selected. The piece Jean and Aino shows the unconventional, surprising and captivating way in which Rantala becomes closer to his personal heroes. Instead of focusing on Sibelius as the composer or musician, he concentrates on him as a husband and dedicates a touching ballad to the “true love story” between Jean and his wife, Aino. Rantala is not satisfied with using what would normally be included in a homage, such as a simple interpretation of the artist’s work. Instead, he seeks out astonishingly accurate parallels, references or conversions – see how he perfectly characterises another Finnish classical artist, Pekka Pohjola, with an Erik Satie-style piece, immersed in a delicate northern sheen.

Equally imaginative as they are tasteful are Rantala's tributes to his jazz heroes. His impulsively played “Can’t Get Up”, played solely into the deeper ranges to evoke an electric bass solo, is a tribute to Jaco Pastorius, the first jazz star Rantala saw when he was 13-years-old. On “Donna Lee” he brings Art Tatum’s pioneering technique back to life, whilst on “Bluesette” it is the incomparable elegance of Oscar Peterson, Rantala’s “father figure” at the ivories, which is revived. On “One More Waltz for Michel Petrucciani”, it is the unique timing and Gallic elements which can be heard in every note, while with ”Thinking of Misty” Rantala reveals the humour of Erroll Garners playing - “This chasm between the happy days of swing and the paranoia of be-bop,” says the pianist. In the closing “Intermezzo”, the entire scope of his playing becomes evident when the opera lover Rantala dedicates his music to Luciano Pavarotti.

Particularly impressive is the homage to his “Swedish neighbour” and colleague Esbjörn Svensson, whom he ungrudgingly admires and who is also a key to Lost Heroes. On “Tears for Esbjörn”, Rantala captures in a very personal way the shock that the tragic and premature death of the pioneering “pop star of jazz” triggered throughout the whole world. “I was very sad for a long time. Esbjörn’s death started a process and I discovered a whole new level of melancholy in myself. I started to compose music which was simply beautiful and calm and this mood pervades the whole album.”

Along with several other pieces on Lost Heroes, “Tears for Esbjörn” is undoubtedly dark, but beautiful at the same time. Together they result in a modest masterpiece by an all-round piano talent who is yet to be discovered by the broad public. The New York pianist and arranger Gil Goldstein quite rightly said: “"Iiro Rantala is a pianistic sensation who makes the strongest case I know to believe in reincarnation because his pianistic technique and musical sensitivity speak of depths which appear impossible to have been achieved in this lifetime alone.