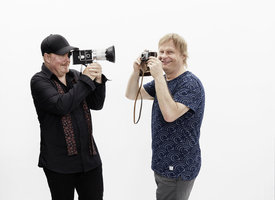 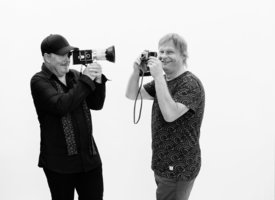 Recorded by Nanni Johansson
at the ACT Art Collection Berlin, May 30 & 31, 2017
Mixed and mastered by Klaus Scheuermann

Cover art by Jiri Geller, Kaos on Geller, 2015
used with the kind permission of the artist

Vienna, Rome, Seoul... Iiro Rantala and Ulf Wakenius are musicians who travel the world, always on tour as leaders of their own projects. So it was something of a fluke that this duo was able to come into existence at all. The idea first emerged in October 2015, when Rantala and Wakenius stopped off at the Philharmonie in Berlin. Siggi Loch, curator of the “Jazz at Berlin Philharmonic” concert series, had brought them together on stage for the “Tears for Esbjörn” concert. “We were part of a larger ensemble on that occasion”, Rantala remembers, “but it was clear to both of us straight away that we would want to form a duo.” This has to be seen as a  very smart move, given the rarity of the piano-guitar duo in jazz – a fine exception being that of Brad Mehldau with Pat Metheny.

Thereafter, whenever gaps could be found in both of their crammed diaries, they would meet to do concerts together. “Each of us would bring some pieces to play”, says Wakenius, “but because we always had so little time in the run-up, we were more or less rehearsing live on stage.” It is precisely this way of approaching the music – with spontaneity, inquisitiveness and a complete lack of preconceived ideas – that gives the duo its fabulous energy. It is worth noting that almost all of the tracks on this album are first takes.

After a much-acclaimed concert at Jazz Baltica in summer 2016, it was evident that this music needed to be recorded. Siggi Loch invited the pair to his gallery in Berlin, where the now famous Alfred Brendel Steinway “D” was awaiting Rantala’s arrival. Each track of the album captures the mood of a different city. These are places which the musicians visit regularly, where they often play, and to which they feel a special connection: “Vienna” sounds as if Mozart could have written it – if he were a jazz musician living now. “Seoul” combines traditional Korean music with the 21st century urban metropolis. “Helsinki”, says Rantala of his home town, “is a relaxed, groovy place.” That’s also where the Finnish artist Jiri Geller is living, who has done the CD artwork. He is just as much at home as the musicians themselves when it comes to reconciling the contradictions between seriousness or concentration and playfulness, flippancy – or just going for an effect.

Puccini's aria “Nessun Dorma” references Milan as an important centre of Italian opera, whereas Georges Bizet’s “Carmen” takes place in Seville, and the Don José - Micaëla duet from it has been arranged by Rantala as gently swaying jazz ballad, in which both piano and guitar sing from the heart. “Berlin”, as portrayed by Ulf Wakenius, is in a state of flux. The city that never sleeps is propelled here by an unrelenting pulse from the guitar; the melody over it is catchy yet elusive. In John Coltrane’s “Giant Steps” both instrumentalists show their dazzling virtuosity. “What A Wonderful World” that was made famous by Louis Armstrong is a summarization of this musical tour of cities: “Every place is lifted by its music and is therefore unique. We've hunted down these specific sounds.”

Rantala and Wakenius always play Stevie Wonder’s “Sir Duke” as the encore at their concerts, and audiences love it. That track was a must for the album, as was “Love The Stuff/Ain‘t No Mountain High Enough” from Stuff, the 70's and 80's jazz-funk band with Richard Tee, Cornell Dupree and Steve Gadd, a group which both men revere. That legendary band also inspired the choice of album title: “Good Stuff”. “The tracks bring together influences and composers that have left their mark on us,” says Wakenius.

He and Rantala have indeed brought together great things, but what they go on to make of these materials and inspirations: that’s the real good stuff.