Iiro Rantala
Anyone With A Heart 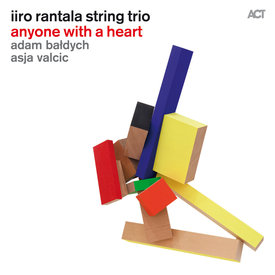 all music composed by iiro rantala

except #10 composed by harold arlen

When pianist Iiro Rantala won the German Record Critics Award three years ago with his ACT and solo debut "Lost Heroes", following it up with the ECHO Jazz and thus abruptly launching himself into the top ranks of Europe's jazz musicians, he could have taken the easy way out and simply made another solo album. But the Finn preferred to keep systematically developing his career. It was also a return to his classical roots: Rantala not only studied in the jazz department of the Sibelius Academy in Helsinki, he also learned classical piano at the Manhattan School of Music in New York. And his passion for music didn't only begin with Johann Sebastian Bach at the tender age of six, it remains a big part of him to this day: "I have to play Bach every day. I need my daily fix of his music." Consequently, the Goldberg Variations also serve as the binding agent for "My History Of Jazz", Rantala's next album on his journey to himself that came out at the end of 2012, in a quartet with Lars Danielsson, Morten Lund and Adam Bałdych.

And now, with "Anyone With A Heart", he takes that journey further, definitively showing himself to be a great Neo Romantic, beyond all stylistic limitations: "I have always loved melodies," he explains, "but in today's jazz, most people try to get by without them. And if they don't, they play standards." "Anyone With A Heart" literally revels in melodies, and unlike on "My History Of Jazz", which was inspired by and addressed to his idols, Rantala this time composed all the numbers himself – all except the homage to the Great American Songbook "Somewhere Over The Rainbow". And he conceived all of them from the outset for the classical form of the piano trio: piano, violin and cello.

It is a form that is quite unique in jazz, and hence not easy to find. There was no question as to who would play the violin: Rantala had already discovered the Pole Adam Bałdych for "My History of Jazz", and there is probably no other violinist who is so similar to him right now. Like Rantala, Bałdych is a consummately virtuoso all-rounder with a distinct lyrical streak. And Bałdych's career is also on a steep upward curve.

What remained was the cello: "I had two names," Rantala recalls, "a Dane, who was, however, already a band leader, and Asja Valcic. I went to one of her concerts in Vienna's Porgy & Bess club, we talked about the project afterwards and that same evening we started playing and practicing. I wrote all the cello parts exactly for her. I love her tone." So this too was an ideal combination. After all, the Austrian also has her background in classical music, and with the radio.string.quartet.vienna and in duet with Klaus Paier she has adequately proven her open-mindedness and entirely independent technique.

On "Anyone With A Heart" the three set off on an overwhelming trip through the human emotions. From the cheery, self-confident pizzicato reveries the likes of "Karma" and "A Gift", to profound, almost furious melancholy as in "Alone", to spiritual exaltations ("Prayer", in which Rantala's love of Bach can also be seen), through to dramatically dynamic waves ("Hard Score") and childlike playfulness ("Happy Hippo", behind which a scene from the Ben Stiller comedy "Along Came Polly" was the driving force) – all brought together in the title track "Anyone With A Heart". The essence of Rantala's new music is perhaps best described by "Freedom", a track inspired by Jonathan Franzen's novel of the same name: each of the three soloists can display their wares here, embedded in a compelling melody, and even when playing together there is scope for all kinds of variations and freedoms, for changes of tempo and harmony, all the way to the tones like those provided here by Rantala on his muted grand piano.

Rantala is aware of the risk he has taken with "Anyone With A Heart": "In former times, for example with the Trio Töykeät, it was all about saying: "Look at us! We can do this too!" Now it's simply about my melodies. That is much more personal. But what is simple is at the same time the difficulty. It is a fine line: if it gets too easy, the Richard Clayderman warning light goes on." Although this is a danger that Rantala, Bałdych and Valcic circumnavigate without even thinking about it, thanks to their ability, intellect and taste. "Anyone With A Heart" is a music that someone like Franz Schubert or Jean Sibelius might create if they were around today.