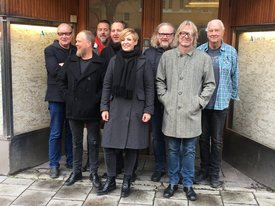 Like jazz, soul has undergone an evolution from an American-based music rooted in the blues into a form of expression that now finds itself at home anywhere in the world. This global reach of the music is visible in ACT’s artist roster where we find, among others, Nils Landgren, Knut Reiersrud, Solveig Slettahjell, Magnus Lindgren, Torsten Goods, and - above all -  the Swedish singer/pianist Ida Sand. Her four previous albums have channelled jazz, pop and folk influences, but "My Soul Kitchen" is different. It is Ida Sand's clearest declaration yet of her love of "sweet soul music", and is also a demonstration of her deep affinity for it. There are songs by soul greats such as Al Green, Stevie Wonder, Ray Charles and The Meters, which are completely at one with both Ida Sand's own tunes and with her soulful interpretations of the music of artists like John Fogerty and Mike Shapiro. As Ida Sand herself says: "Soul music is such a broad genre. There’s funky soul, blue-eyed soul, neo-soul, RnB, New Orleans soul, Motown-soul and many others. This album is a blend of many of these.”

The band taking care of business throughout "My Soul Kitchen" is not just tight, it grooves organically. "Stockholm Undergound" consists of the Swedish recording scene’s finest. They made a huge impression on flautist Magnus Lindgren’s debut as leader on the ACT label, and are also the same musicians who formed the basis of Nils Landgren's first "Funk Unit". As Ida Sand remembers: “When I was 17 I really wanted to go to Fasching jazz club in Stockholm to listen to Nils Landgren and his Funk Unit. At the time, the band included Henrik Janson on guitar, bassist Lars DK Danielsson (not to be confused with double bassist and cellist Lars Danielsson) and drummer Per Lindvall. A few years later, keyboard player Jesper Nordenström joined the band. I was very excited because they were the best musicians I knew about back then. But to my disappointment it turned out I was too young, and the doorman said he couldn’t let me in. I started crying, and he felt so bad for me that he did let me in.  During the show, I remember saying to myself:

‘Imagine if I could play with these guys some day.’ And now I do!
I don't have the words to express what a joy it is to have gathered these musicians on my album. In addition, Magnus Lindgren, who is simply one of the most inspiring musicians I know, contributed the horn arrangements."

The presence of a distinguished veteran has also made its presence felt on "My Soul Kitchen". This doyen of the scene is not a musician but a recording studio, the Atlantis Studio in Stockholm, which for nearly 60 years has been a nucleus of the Swedish recording scene. Albums by jazz artists such as e.s.t., Coleman Hawkins, Jan Lundgren, Magnus Öström, Jan Johansson and Nils Landgren were produced there, but above all legendary pop recordings by ABBA, Elvis Costello, Lenny Kravitz, Roxette, The Cardigans, Fatboy Slim, Randy Crawford, Mando Diao and many more. Atlantis’  renowned sound engineer Janne Hansson has also given "My Soul Kitchen" an unmistakably warm, earthy, soft, yet crisp and extremely natural sound that inevitably evokes associations with original recordings from the heyday of American soul and legendary labels such as Motown or Stax Records.

"We spent three wonderful days in the studio with the two producers Nils Landgren and Siggi Loch," recalls Ida Sand. "Everything was so incredibly smooth and natural. Most of the tracks on the album are first takes. It was such a pleasure to see this band at work and to be a part of it. Together we have cooked a hot soul casserole for our listeners. And we hope they turn up the music and enjoy it together with some good friends. They'll love the taste of it, I guarantee ya!"