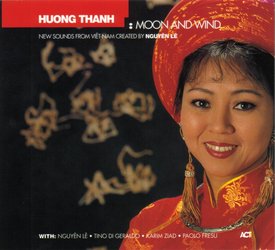 Engineered* and mixed by Nguyên Lê at Louxor Studio, Paris Barbès from August 1998 to February 1999
*except #9 recorded live by Hervé Stauch, Le Blanc Mesnil on April 17, 1996
Produced by Nguyên Lê

New Sounds from the World

"Let us redefine World Music as the new identity the children of the diaspora are building between the streams of today and the search for the deepest tradition. Since we live here, we have integrated the tools of the West to create our own culture. From Tales from Viêt-Nam to Moon and Wind, I have always tried to weave together the threads of those encounters where each one, with his own culture, can give the best of himself. So many things are yet to be shared ! "

Huong Thanh is not unknown to those who like and appreciate Vietnamese traditional music. As her father was Huu Phuoc, a great cai luong (1) artist, the water-like arpeggios of the dàn tranh, the 16-string zither, or the melancholy plaint of the dàn bàu, the monochord, have always been part of her life. But not satisfied with just following the path paved by her ancestors, Huong Thanh manifests a sincere will to, on the one hand, sing everything, i.e. every kind of Vietnamese traditional music, wherever it comes from - North, Centre or South - and on the other hand, open up to the world as well as modernity. Disregarding the prejudices of the purists, she does not hesitate to play all modes and every repertoire.

Moon and Wind, her first solo album, created by her producer and friend Nguyên Lê, provoked many a surprising encounter: on "One River, Two Streams", a lovesong which probably goes back to the 15th century, Huong Thanh sings accompanied by the Berber gumbri player (2) Karim Ziad. (He owed her that one: she sang on the Maghreb & Friends album, 1998, ACT 9261-2). The Soaring of the Heron, a melody all Vietnamese people have sung, hosts an unexpected guest: Tino di Geraldo, ubiquitous Flamenco artist from Madrid, with his palmas (3) and his cajón (4). Happy accident, not so accidental, as it were, for it seems that both musical sensibilities blend into one intense emotion: Huong Thanh’s voice is reminiscent of flamenco’s sensuality.

Thus, encounters and blends all concocted by Nguyên Lê, who had already made Huong Thanh sing on his Tales from Viêt-Nam  (1996, ACT 9225-2), and without whom, she would never have taken the first step... Like him, she proves that cross-culture is no lesser culture, if the mixing is true, and the understanding of the other people and culture really means something, not just a superficial mixture with commercial ends.

But Huong Thanh, remember, is a child of the tradition and also comes from the Mekong region, a mix of different cultures. So like that land’s first settlers come from the North, who had to conquer and assimilate the original traditions (Chinese, Cham, Khmer and Montagnard), Huong Thanh, today a Vietnamese exile living in Paris since 1977, had in turn to feed on this outside world, that has become like a second home to her. Through the grace of her vocal presence, Huong Thanh just reminds those who might have forgotten, that Viêt-Nam, despite her regional diversity, is one, and at the same time, need partake of universal culture.

(1) cai luong: "renovated theatre", a theatrical art based on songs and dances, created in 1916 in the South of Viêt-Nam.

(2) gumbri: three-string lute, the bass of the desert ",  representative of Gnawa music.