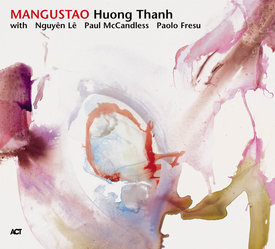 Those who have tasted it call it the  «Fruit of the Gods». Inside its rough, red and dark rind, the Mangosteen conceals a delicious and fresh pulp, like a perfumed flower, white & pure as the snow of sources. One should know how to open it with bare hands, in that asian way made of delicacy and firmness. Like Beauty, Mangosteen is a secret fruit.

«Mangustao» is Huong Thanh’s third album, following «Moon & Wind»(1999, ACT 9269-2) and «Dragonfly»(2001, ACT 9293-2). It shows the evolution of  work that began with Nguyên Lê in 1995 with «Tales from Viêt-Nam» (ACT 9225-2). The leading thread in this work is still the mixing of Viêt-Nam’s musical tradition with today’s diversity of languages & techniques. And, eventually to transmit this love for Viêt-Nam to the whole world.

Who else better than Huong Thanh, born in Saigon from a father renowned as an oustanding singer/actor of the « Renovated Theater » (Cai Luong),  can embody this quest for a New Sound from Viêt-Nam ? Raised in the tradition, she was 17 when she arrived in France. And moreover she has a youthful mind & a dynamism which drives her to widen the borders of the past and open her spirit to new encounters. Thus she has become one of the rare Vietnamese singers who not only sings in the style of her native south, but can also perform the music from the north, the center, and from the ethnic minorities. Although Huong Thanh’s voice remains entirely pure, this is not for purists. However, the purpose is not to westernize, or to jazzify the singing, nor to discard the accents which are so precious to the meaning & the music of the Vietnamese language. Whenever the melodies descend from pure tradition, they are fully respected ; when Nguyên Lê writes the melodies, poet Hong Nguyên matches the accents of the lyrics with the melodic line. What changes is the way these melodies are presented, and here a new universe begins, and new worlds come together.

«The Mountain and the Source» is based on the juxtaposition of two quite different melodies: the first one from algerian musician Karim Ziad, the second one from the ancient vietnamese repertoire. With both languages and between both worlds, an incredible dialog is created. «The Blue Dome of the Sky» is a new composition in which Nguyên Lê has imagined he was a turkish musician writing a traditional melody. He was inspired by working with Turkish ney master, Kudsi Erguner. This piece features Iranian percussionist Bijan Chemirani, whose subtle & virtuosic zarb brings the Middle East closer to the Far East; Also the haunting sound of a very european american – Paul McCandless who has for a long time wed western classical music with jazz and who meets the music of Asia here. In «Cold Winter, Faraway Land» Nguyên Lê uses the same writing process –but this time he dreams of Viêt-Nam. The way Huong Thanh sings this initially instrumental melody makes Nguyên Lê’s dream come true. In «Heave Ho» the friends from West Indies (Bago & Roland Chammongom) & from Ivory Coast (Paul Nemlin) show the earthly link which has always brought Work & Singing together. The Cane & Rice workers get together on a traditional West Indies rhythm (Gwoka) with Huong Thanh’s luminous singing & the gospel choir in creole dialect. «South Delta Song» is another worksong from South Viêt-Nam in which Huong Thanh’s singing is like a heart-rending call for this reunion, an invocation to the universal spirit of the blues carried by the strings section & Paul McCandless’ mournful english horn.

As in all of Huong Thanh’s albums, long time friends are here to take part in the sound created together : Sardinian trumpet player Paolo Fresu is both the fluttering butterfly in « Perfumed Flower » and the moon light in « Moon Boat ». Piano player Dominique Borker co-wrote « In the Pagoda » and distilled her aerial touch to suit Huong Thanh’s so well. In «The Courting», Illya Amar’s marimba gives a light African touch, adding a fine color to the typically Vietnamese monocorde played by Duong Tam, a traditional musician based in Los Angeles. Without your parents, you are like « Like a guitar with no strings » – with this touching lullaby from South Viêt-Nam, tunisian Oud player Dhafer Youssef dreams up an All South Blues.

All these encounters, created and orchestrated by Nguyên Lê, have given birth to the suave Mangustao. May some auspicious rain nourish this fruit and take us from distant tropics to future skies !