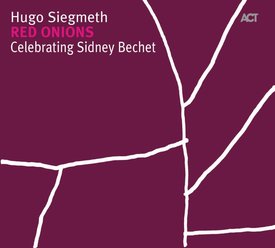 The timeless charm of "Red Onions": The young saxophone player Hugo Siegmeth pays his tribute to Sidney Bechet, yet he shines with his own light.

"But you know, no music is my music. It's everybody's who can feel it. You got to be in the sun to feel the sun. It's that way with music too." (Sidney Bechet "Treat It Gentle. An Autobiography")

In the mid 1920's only Louis Armstrong held more popularity outside the confines of the jazz community. The fact is: Sidney Bechet had an aura like virtually nobody else. A clarinet player and the first influential stylist on soprano saxophone, he was also the first artist to be signed by Francis Wolf and Alfred Lion for their famous label Blue-Note and is still held to be one of the greatest personalities in jazz. He was born on May 14th 1897, in the cradle of jazz, New Orleans, and he died in 1959, on his birthday in Paris, at the time the unchallenged jazz capital of Europe. Bechet was so popular in France, where he settled in the 1940's, that Joachim-Ernst Berendt claims he could have had himself elected as mayor of Paris by a wide margin. But even outside of France, it is hard to find someone who did more to popularize jazz in Europe. Siegfried Loch, head of ACT Records remembers: "I saw Sidney Bechet in 1955 in Hannover. This was my first jazz concert ever. The ‚little big man' instantly infected me with the jazz virus and has changed my life forever." On May 14th (2006), his birthday and the anniversary of his passing away, ACT is releasing a homage to Bechet – by a young German jazz musician, who is celebrating his debut for ACT: saxophonist and clarinettist Hugo Siegmeth.

This musical tribute is, in Siegmeth's case, paid by someone who is firmly rooted in his own style. Born in 1970 in Romania and raised in Germany, he has gained an ever-stronger profile over the years as confident and precise improviser, bandleader and composer of tangible, yet subtle tunes. His aim was never to imitate Bechet in style or content. "I wanted to address the material using my own vocabulary", says Siegmeth. And this vocabulary is strongly influenced by the modern school of tenor playing; by the laconic vigour of a Sonny Rollins, Wayne Shorter's strong sense of form, or Joe Henderson's iridescent colour palette. Siegmeth places pieces that were once power horses of Bechet's repertoire in a contemporary context. Furthermore he consciously avoids the soprano sax and chooses to use only tenor and clarinet on this recording.

Music by Bechet without soprano sax and totally devoid of Dixie-flair; this opens a number of different and exciting avenues of expression. Siegmeth plays a lot of the tunes with his stellar quartet – which features three highly renowned partners of the current German scene: pianist Carsten Daerr, bassist Henning Sieverts and drummer Bastian Jütte. Some of the music is with a piano-less trio, and four of the tunes feature the violinist Jörg Widmoser's Modern String Quartet. Another guest is guitarist and banjo player Geoff Goodman, who adds further surprising colours. Siegmeth has realised his declared aim to "paint a picture of Bechet's work in as many different colours as possible" in style and in a very entertaining manner. Take Gershwin's "Summertime" for example, one of Bechet's hugely important early Blue-Note recordings: it is cleverly transformed by a string quartet reggae-rhythm and a subtle hook line, that thrives off unusual turns and deviations. On "St. James Infirmary Blues" the banjo and a melancholy cello line that has overtones of Japanese koto create a surprising and pleasing effect. One of the subtly brilliant pieces on this recording is "Maple Leaf Rag"; a trio take with sax, bass and drums, that derives a sophisticated drive from alternating 7/4 and 4/4 metres and sounds like contemporary trio jazz, even though Siegmeth stays very close to Bechet's take on the original melody.

While Bechet originals, and standards for which Bechet provided benchmark recordings characterize the body of the CD, two Siegmeth originals form an important part of this recording. The dynamically swinging "Juan-Les Pins" calls into mind the place where, in 1951, Bechet married the German Elisabeth Ziegler. And "Treat It Gentle", a blues-tinged jazz passacaglia which alludes to the title of Bechet's autobiography, a book that to this day remains an exciting read. These two tunes show the measure of respect that the 73 years younger player brings to his musical ancestor, and they provide a clear picture the inspiration transmitted by his musical heritage. If Bechet could hear Siegmeth's homage, he would quite likely say: "My music is yours, and yours is mine. You can feel it, it is yours." Or to put it differently: Siegmeth's tribute to Bechet places him in the sun, and yet he shines in his own light.