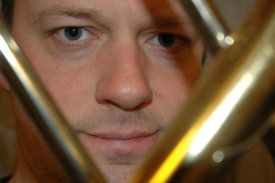 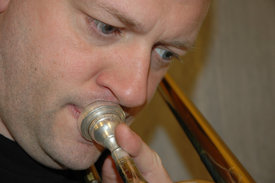 The music of Helge Sunde requires musicians with great technical capacity and ability to sense their position in the musical landscape. Playing the music has been described as a hike in Sundes native western Norway: Even if you know the terrain and can reed the map, you actually have to climb a few peaks, jump over icy streams and pass through steep fjord valleys - without loosing contact with the rest of the hikers. The reward is a magnificent musical view and a new understanding of what a big band can be. The band Norske Store is the ensemble of the East Norway Jazz Centre, and the musicians are personally selected to work with innovation, production and performance of new Norwegian music for large jazz ensembles. Executive producer of «Norske Store» is Anders Eriksson.
A swan, a fish, and the art of concealment:
DENADA, Norwegian composer and big band leader Helge Sunde’s ACT-debut
Another astonishing big band leader from Norway: trombonist and composer Helge Sunde, born in 1965. Again a great master of the genre, just like his compatriot Geir Lysne, who astonished five years ago the international jazz world with big band sounds and arrangements of great strength and stylistic distinctiveness. Helge Sunde allows his big band to develop a unique sound of its own. Sunde is himself a member of Geir Lysne’s Listening Ensemble, and some of his musicians belong to Lysne’s band too. But Sunde - incidentally the same age as Lysne - is in no way an imitator of his colleague. Sunde leads the large jazz ensemble into a sonic territory entirely its own. His language is influenced by the fact that he is also active as a composer of avant-garde contemporary music. His jazz works are shrewdly crafted and contain a multitude of surprising details, and yet: the music on DENADA (ACTSACD 9805-2) always remains highly sensual, never academic.
Helge Sunde's versatility can justifiably be called sheer unbelievable. To this date his writing has been more visible than his playing; he has written commissions for the Norwegian Radio Symphony Orchestra, for the Stavanger Symphony Orchestra and the Bergen Philharmonic, for the Norway’s National Ballet and the Oslo Sinfonietta. He has worked as an arranger for Marilyn Mazur (who is also featured on DENADA for Beady Belle and Caecilie Norby. Furthermore he works as a conductor and producer for pop and classical releases. He teaches jazz, trombone, composition and arranging at the Norway State Music Academy. He can look back to an early success in 1990: Together with some fellow students, he was part of an ensemble under the name of the Oslo Groove Company that won the Spellemannspris, the Norwegian equivalent to a Grammy. On DENADA we can hear him demonstrate his mastery of a great assortment of roles, as an instrumentalist on trombone, trumpet, tuba and French horn.
From the very beginning on, this SACD displays a mesmerizing, highly differentiated tonal language of vibrant intensity. A driving rhythm supports the ingenious voice leading of the interlocking horn lines. The treatment of woodwind, muted brass and low wind voices is constantly surprising in its multifaceted colouring and an exceptionally subtle use of dynamics. It is hard to imagine a more refined treatment of soft and loud. It was worth releasing this recording on SACD – in highest fidelity – to bring out the full richness of these compositions and arrangements. Very rewarding for the listener!
In all his compositions Helge Sunde displays a considerable and unusual ability to unify opposites, not only in his subtle use of the widest dynamic palette, but also in the coexistence of lyrical beauty and a carefully organised release of energy. Despite the highly organised sense of structure, he leaves a lot of space for his soloists, pianist Olga Konkova (repeatedly), guitarist Jens Thoresen, a number of horn players and last but not least Marilyn Mazur, who has a decisive influence on “Small Landscape” among other tracks. The album combines compositional rigour with individual expressiveness in a most refined and organic way. The French baroque composer Jean-Philippe Rameau once declared it his aim “to hide art by art itself”, a maxim that can be heard in a number of Sunde’s compositions. They do not advertise their complexity; they make it seem natural. “Lesson III” for example is based on a twelve-tone row exercise that he was given as a student: He succeeded in writing a jazz piece in g-minor while strictly adhering to the rules of serial composition. Sunde recently rediscovered the tune on a faded piece of paper while clearing up his studio – and recorded it: Music that never sounds constructed, but remains - at all times - highly sensual.
Each of the compositions exudes the spirited joy of playing with sound. Not least “Den Grimme” (The Ugly Duckling). Prima ballerina Ingrid Lorentzen from the Norwegian National Ballet needed a new version of Saint-Saëns’ “Swan”, and Helge Sunde wrote after a long day of rehearsing, while his colleagues cooked a fish dinner for him. Next morning, they found the finished piece on their music stands. Thus the swan received his jazz-knighthood. In no way does he remain an ugly duckling, but he enfolds his beauty with an ironically broken pathos that still carries undertones of his humble origins. The fish evidently did not do him any harm.
Sunde is a virtuoso craftsman and a highly creative spirit. DENADA is full of impressively glamorous and unique big band playing, it is a listening-adventure and at the same time an iridescent delight.