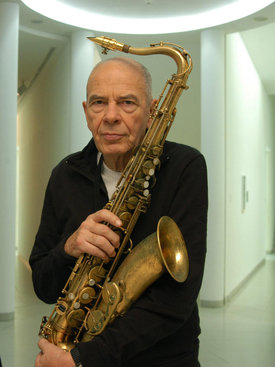 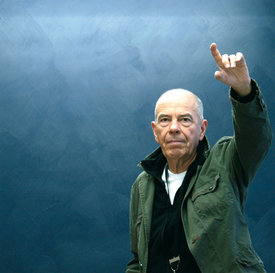 On December 25, 2007 saxophone legend Heinz Sauer, one of the cornerstones of German jazz, will turn 75. Sauer is not only one of the most influential players of the German post-war period; he is one of the great individualistic stylists on the world scene and a master of the tenor saxophone. Out of great respect for his work ACT is releasing a 75th anniversary album, The Journey. The CD contains a cross-section of his works, with 15 of the most important recordings from 1964 through today. Many of these are musical gems that have been stored deep within various archives and now brought to the light of day. At the same time the album offers a view of more than 40 years of German musical history – lived through by one of the greats of German jazz.

Sauer combines the warmth and lyricism of Ben Webster with the experimental eccentricities of Archie Shepp and the rhythmic variety of Sonny Rollins, but in the end, the tone is his own. And yet perhaps it’s not just his tone that distinguishes Heinz Sauer from all the others. It is his stance, his continual struggle with this tone. Expressive is the magic word that best defines Heinz Sauer’s music. He is uncompromising in his search for the essential, the connection between standards and new sounds, between form and function. The intensive improvisation process involved resembles a conversation: Heinz Sauer is the great story teller of German jazz. This is not a secret, as Sauer received the German jazz prize in 1999, and two years ago the critic Konrad Heidkamp surmised that, “had Heinz Sauer lived in New York, he would be standing on the jazz saxophone immortals”. However, such praise has been late in coming.

Besides the saying about “a prophet in one’s own land”, there are a couple of clear reasons why it is only in the last few years that saxophonist Heinz Sauer has begun to receive the sort of recognition he has deserved over the last decades. One concerns the towering figure of his friend Albert Mangelsdorff in whose shadow Sauer has stood. Mangelsdorff was not only the jazz world’s most formative trombonist of his time, he was also an eloquent proselytiser of the music. Sauer on the other hand came across as intractable and taciturn, perhaps because he, like his music, was clear and to-the-point when there was something to say. Another reason was his consistency: he did his own thing and refused to follow trends, and he has always been against cliché-ridden music of any ilk.

Naturally, Sauer has also played with some of the other jazz greats, especially at the German Jazz Festival in Frankfurt: in 1978 he played with Archie Shepp, George Adams, and Jack DeJohnette, with Bennie Wallace in 1980, two years later with the blues harp star Carey Bell, and in 1986 with Tomasz Stanko. Much more typical and remarkable is the unconditional loyalty towards the few musicians whom he recognized as an ideal partner: first, the Hessian Radio Jazz Ensemble with and for whom he has been playing and composing since 1960; then there is his work with Albert Mangelsdorff which spanned a period of over twenty years. Later, from 1977 on, it was pianist Bob Degen who – besides bassist Stephan Schmolk – became the mainstay in Sauer’s groups as they strode across jazz history, continually uncovering new sounds and sensibilities. For their LP “Ellingtonia Revisited” Sauer and Degen received the German Record Critics' Award in 1981.

When Degen went back to the USA, Heinz Sauer had a long time to mull over the situation. It wasn’t until 2001 that he met the young pianist Michael Wollny, and once again he had found the ideal partner for his duo playing. With 75, at an age where most everyone else is propped up in his or her favourite easy chair, Sauer has stepped up to a further creative phase. With Wollny, Sauer has found a congenial foil and accompanist to his music in one person, someone who can not only stand up to his flood of narrative ideas, but also consolidate and expand them in a musical dialogue. This bridging over generations has proven to be an amazing source of inspiration: here the veteran whose playing reverberates with the whole of modern jazz, there the unencumbered novice who flows freely through the harmonies while exhausting all the piano’s possibilities, from its most strident to the most subtle. The likes of Ellington and Gershwin are no longer the only code-words in their musical conversation. Esbjörn Svensson, Prince, and Sinead O’Connor are now part and parcel of their lexicon. If you take the two acclaimed CDs Sauer and Wollny have already recorded for ACT as a yardstick it seems like the great saxophonist must have fallen into the fountain of youth. We should be excited about what else he has to say.