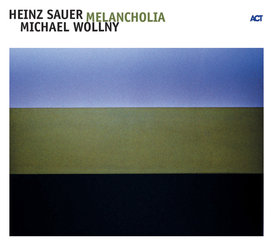 It’s a very special kind of meeting, a leap across the generation divide: Melancholia documents the creative collaboration between one of the most important influences on post-war jazz and one of the greatest talents of the new breed of jazzers in Germany: Heinz Sauer and Michael Wollny.

In the eternal discussion about how much virtuosity is required before it becomes an end in itself and overpowers expression, Heinz Sauer is certainly not a participant. The Frankfurt saxophonist is so obviously one of the major expressive players of the current scene that it would be wrong even to start considering such questions. Technique is there and will clearly be demonstrated in his approach – you need just to hear his overtone playing to confirm that – but it is not just treated in its own right, and rather is used to celebrate the sound and the dramatic development. Every tone is a painting and even the smallest phrase a sculpture. Sauer has always been a master of the terse miniature, but not in the way that it is shown in this CD. The music can be contrasted with his compositions for the Jazz Ensemble of Jazz Ensemble of the Frankfurt Radio where he brings together strange themes in amazing elaborate arrangements. Here then, in the smallest of combinations, the duo, the concept of the short piece piece (most of them no longer than three minutes) is taken in a different direction: The aim is the concentration of the individual on each detail of the sounds of improvisation as well as the interplay between the partners. It often then evolves into the rhythmically free shaping of the themes.

Sauer has taken for this release the 26 year old pianist Michael Wollny, with whom he has frequently worked in a variety of line-ups. Wollny is one of the great hopes of the generation of the Under-30s: with a broad range of experience, well-travelled, the winner of a number of prizes, a member of numerous large and small bands, appearances in the company of American stars and a theatre musician who as such has confronted other worlds. On this CD he comments and supports with a fascinating mixture of wisdom and playfulness. In the discipline of touch and in the harmonic understanding his experiences in classical music are evident, from chorales to punctualism and even a slight hunch of atonality.

In particular with the most well-known standards, and most notably in Round Midnight and Don’t Explain Sauer plays freely around on the melodic elements, while Wollny knowledgably creates unpredictable harmonies askew from the original changes – technical details in the service of the creation of a compelling atmosphere for each piece: bright and dark, the clamour and the aesthetic play with beauty, the associations which are different for each hearer, as clearly understood by Heinz Sauer in the title of his piece "Welcome To What You Think You Hear".

Heinz Sauer – saxophone legend and cornerstone of German jazz – was born in 1932 in Merseburg. Since 1960 he has been saxophonist and composer for the Jazz Ensemble of Hessicher Rundfunk in Frankfurt. From 1960 to 1978 he was a member of the Albert Mangelsdorff Quartet and Quintet, and in 1968 was a member of the German All Stars. In 1974 he formed his first own line-up, Voices. The obvious individuality and artistic intensity of his saxophone playing and his compositions have allowed Sauer to go his own individual way. For this he was recognized by the award of the Jazz Prize of the region of Hessen and in 1999 by the Albert Mangelssdorf Prize.

Michael Wollny was born in Schweinfurt in 1978 and began at the age of 16 jazz piano studies at the music school in Würzburg, which he completed in 2004 with a master class diploma. He has a wide range of concert, touring and radio production experience with, among others, the BuJazzO, the Summit Jazz Orchestra, Bob Brookmeyer/New Art Orchestra or the Jazz Ensemble of Hessischer Rundfunk and has also taken part in recordings by the likes of Hubert Winter and Hans-Peter Salentin. In addition he is also pianist and musical collaborator at the Schauspielhaus Nürnberg. Wollny has received a number of prizes and scholarships, most recently the Cultural Prize of the City of Schweinfurt in 2003. Together with Eva Kruse and Eric Schaefer he formed the trio [em] 18 months ago which releases its first CD on ACT in early 2005, Call it [em] (ACT 9650-2). Since 2001 Wollny has worked together with Heinz Sauer in a number of different line-ups.