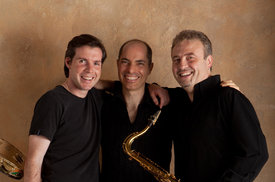 Once upon a time … there was a lighthouse

On England’s north east coast, just before the Scottish border, on an island near Whitley Bay, stands a gleaming white lighthouse - St. Mary’s Lighthouse - which ascends into the sky. The five hundred metres between the tiny island and the coast can only be crossed at low tide. When Tim Garland took on a job as composer-in-residence at nearby Newcastle university he decided to buy a house - near the lighthouse. “You enter this space and the first thing you notice is the special acoustics. It's totally hollow inside. When the tide is in, the lighthouse stands in water and is cut off from the land and then all you can hear and see is the sea.” For the CD “If The Sea Replied” Garland recorded several bass clarinet solos in the lighthouse which he later orchestrated. During his work he had the idea of presenting the project live and for this he needed fellow musicians - and the Lighthouse Trio was born.

Garland taught Gwilym Simcock at London’s Royal Academy of Music. To talk of the pianist as a kindred spirit would be typical British understatement. The Welsh pianist whose awardwinning solo album “Good Days at Schloss Elmau” finally gave him star status forms, together with Garland, one of the most productive partnerships around. Alongside Lighthouse, they also work in Malcolm Creese's 'Acoustic Triangle' - a drum-less trio which regards resonance as the fourth band member and prefers giving concerts in churches and cathedrals.

The Israeli conjurer of sound - drummer and percussionist in one - Asaf Sirkis quickly became one of the most interesting trendsetters of the jazz and world music scene after his move to London, including work as hand drummer in Gilad Atzmon's Orient House Ensemble. But it was for the Lighthouse Trio that he developed an especially composed drum set which is tailored for music full of rhythmic surprises, and perfect to showcase his ability to create unusual sounds. Garland, Simcock and Sirkis sound out all imaginable possibilities of this unusual instrumentation. A miniature orchestra that unites skillfully interweaving melodies, complexity and groove, and yet, in doing so, works astonishingly effortlessly. There is both the air of a sonorous countryside idyll, a reflective sea mood, but also an urban, pulsating energy which ignites one flare after the next.

A celtic influence surfaces on some of the trio's material, unsurprising given Simcock's birthplace (Bangor, North Wales) and Tim's musical history (incl. British Folk/Jazz group 'Lammas' for many years). Strong, distinctive melodies and bounding folk-tinged rhythms underpin the music, along with many other influences from around the world and some tributes to a few of the great musicians of recent British contemporary music history. If St. Mary’s Lighthouse is a genuine sight, this Lighthouse is a major aural sight - a new chapter in lighthouse history.

01 Space Junk: This was written after I did some work in Ibiza with two great DJ's, Carl Cox and Yousef. It was also inspired by a news story about a satellite that disintegrated and fell to earth in large 'fridge-sized' pieces in 2011!

02 Weathergirls: An idea of Tim's, that morphed into a co-write; Breezy, bright with occasional stormy patches.

03 One Morning: Like any other, but for this. In memory of those we have loved.

04 Above The Sun: The piece came as a kind of reply to a previous Lighthouse tune, 'Bajo Del Sol', which we've had a lot of fun playing many times around the world. Like its predecessor, this has a touch of flamenco in its blood.

05 The Wind On The Water: Midnight walks along a Northumberland beach. 'Lucky' barks at the luminous

waves that reach for us under the stars and a giant moon.

06 King Barolo: For Malcolm Creese, founder of Acoustic Triangle, a British Classical/Jazz trio that celebrated its 10th year in 2011. Gigs are often followed by a great deal of fun afterwards, as Malcolm's great generosity often extends to sharing a bottle of his favourite tipple...

07 Wax Lyrical: Dedicated to legendary British saxophonist Stan Sulzmann, who I've had the great pleasure of working with over the last 10 years. As well as an inspiration to many generations of musicians in this country, Stan has a huge wealth of fantastic (and always hilarious!) tales to tell from his life as a musician.

08 Devilled: A tribute to the music of Yes/King Crimson drummer and Prog Rock pioneer Bill Bruford,

whose band Earthworks Tim and I played in before Bill's retirement a few years ago.