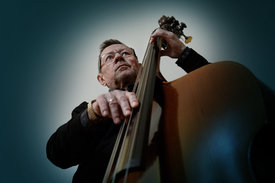 A little while ago, the British "Guardian" wrote that ACT was on a mission to sign the best European pianists to its label. Creative virtuosos like Yaron Herman, Leszek Mozdzer and Gwilym Simcock bear witness to the fact that these pianists do not have to come from Scandinavia. And that they don't have to be young is now proven by the Emil Viklicky ACT debut "Together Again". The 65 year-old Czech national has perhaps stayed too down-to-earth for us to have discovered him earlier for what he is: the "patriarch of Czech jazz piano", as the London Evening Standard put it. And "one of the best contemporary pianists, whose touch, voicing and chords have a lot in common with the grand masters of taste the likes of Tommy Flanagan and Jimmy Rowles," as the American periodical Jazz Time wrote of him in 2004.

Raised in a musical family in Olmütz, Viklicky first studied mathematics, culminating in an excellent degree, but parallel to that he discovered jazz and practiced so much that he was voted Best Soloist at the Czech Amateur Jazz Festival in 1974. Immediately after, Karel Velebny recruited him for his SHQ Ensemble, which was probably the best-known jazz band in Czechoslovakia. Viklicky won more prizes and ultimately a scholarship to study composition at the Berklee College of Music in Boston. So it was that he spent five years in the American system: "I learned everything you need to know there: the fundamentals of composition and arrangement, but also what it takes to succeed as a professional musician," he recalls.

Back in Prague he reaped the benefit of that: Viklicky was not only the best jazz pianists in the country, he was also one of the most celebrated film music composers, one of the most formative teachers, one of the most important neoclassical composers, and for a time after the fall of Communism the president of the Czech Jazz Society. It was there that he met his former countryman again, who had chosen the other path from the same starting point: the bassist four years his senior, George Mraz. Like Viklicky, Mraz also gained his first professional experience with Karel Velebny.

Before Viklicky he had also studied in Berklee, and then lived a year in Munich. But unlike Viklicky, Mraz did not return to Czechoslovakia after the suppression of the Prague Spring, but instead went to the US to launch his career. He has credits on almost 1,000 records and CDs. There is as good as no big name in jazz that he hasn't made music with. The Thad Jones/Mel Lewis Orchestra, Stan Getz, Tommy Flanagan and Richie Beirach (with whom he also recorded three albums for ACT) were his most important regular partners.

"George plays the bass like he invented it. He always plays exactly the note you want to hear," said pianist Beirach about him once. Just as significant is that Mraz initially learned violin and alto saxophone: probably the reason why he is possibly the best exponents of the bow in jazz. And he has a strong lyrical streak, which is also capable of going on the offensive, and an unmistakable vibrato.

It is no wonder that after ten years with Tommy Flanagan, Mraz ended up with Viklicky just a few years later. They had already met in 1976 at a festival in Yugoslavia. Then, in 1997 they more or less inevitably found their way back to each other, since both of them had the same idea: to transfer the Moravian folk music they had grown up with into jazz. It may surprise some people here, but parallel to the folk music crusade in jazz that started out from Scandinavia to conquer the world, the same occurred in the Czech Republic with "Moravia" in 2002 and "Moravian Gems" in 2007 – although brought out on Milestone in the USA, and not reaching a particularly large audience.

But this captivating, imaginative music played by two extraordinary musicians is simply too good to fade into oblivion, thought Siggi Loch. And rightly so, as a track like "Austerlitz" proves: especially the harmonic alterations are quite without comparison, "which is due to the modal character of southern Moravian folk music," as Viklicky explains. And so it is that ballads like "Dear Lover", "Javorina", "Moon and Sleeping In The Cradle" sound like Randy Newman or Ray Charles numbers gone Slavic by means of delicate chromatics, trills and acciaccatura. The European and American classical influence can be heard perfectly, for example on "In Holomóc Town": after the expressionistic, bowed bass introduction comes a veritable lesson in swinging post-bop.

And in Leoš Janáček's "Theme From 5th Part Of Sinfonietta", another special feature of this recording can be discovered. Originally, Viklicky had arranged his old and new compositions for a trio, just as he had for the earlier recordings. But while practicing alone with George Mraz in Munich, the two noticed that it sounded good without a drummer too. More than that: when listening to "Together Again" played by a duet, it is difficult to imagine how Viklicky's inimitable playing style, with legato and staccato, could be presented better.

A new Czech way of jazz, fresh ideas on traditional foundations and no least of all two of the most remarkable voices of jazz can be discovered on "Together Again". Better late than never.