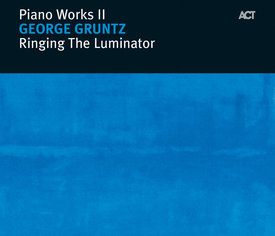 The solo side of a cosmopolitan who loves to perform:
George Gruntz's piano CD "Ringing The Luminator"

You can’t blame the fact that it’s taken four decades for this musician to bring out his first CD as a piano soloist on the slowness for which the Swiss are renowned. Since the 1960s George Gruntz (born 1932 in Basle) has been known internationally as a musician. Yet these recordings - which were made in a church in Zurich (of which more below) -  are a premiere. George Gruntz is known as a big band leader, composer and long-time artistic director of the Berlin Jazz Days (later known as the Jazz Festival) from 1972 to 1994. But never before has Gruntz released a solo piano album. There were always other projects which took priority, he says, so that he "never fought to make a solo career", even if he has regularly performed solo. The other projects include recordings and tours with his famous Concert Jazz Band, in which such a variety of top quality artists have played including Joe Henderson, Lee Konitz, Ray Anderson, Howard Johnson, Franco Ambrosetti and Dino Saluzzi have played; or else compositions for the Zurich Theatre, of which Gruntz was musical director from 1970 to 1984.

George Gruntz always enjoyed playing the piano, and indeed quite well. You can notice both of these immediately on hearing this CD. And these recordings also show something else clearly: Gruntz is a musician with clearly many expressive sides and styles. Not least he is able to show off a unique musical humour and inner meaning. An intellectual who loves to play is shown both in originals and in his interpretations of classics from the jazz repertoire.

That Gruntz has at last consigned to tape the solo part of his broad musical capabilities is greatly due to the determination of the young sound engineer and designer Lasse Nipkow. As "Artist in Residence" at the Yehudi Menuhin Festival in Gstaad in the Berner Oberland, Gruntz had performed, to great acclamation, a solo version of Vivaldi’s "Four Seasons" on the very own personal piano of violinist Menuhin.  Nipkow was at the concert and always was making recordings whenever Gruntz played solo. Finally Nipkow persuaded the musician to make the recordings for this CD at the protestant Witikon Church in Zurich - on a Steinway Series D piano. Gruntz enthuses with a surprising comparison: "He placed the piano in the perfect place for recording in the church - just like a wonderful warm bath. The piano sounds amazing in this room! It was so inspiring that we were able to get most of the pieces done on the first take."

So a great coincidence: an aristocratic instrument, perfect acoustics in an incredible space - and a noticable animated artist during each piece. ACT label boss Siegfried Loch realised this immediately and fell in love with the album. A rounded solo self-portrait of the big band leader is achieved by the 13 cuts on this CD (to which Gruntz gave the working title "Big Band Loves Piano"). The centrepiece is a composition about the return of a famous work of art to Basle. The "Luminator" is a 24 metre long construction out of iron, wheels and lamps by the artist Jean Tinguely, the leading light of unorthodox and generally useless machines. It stood originally in the railway station in Basle, was taken in the mean time for restoration to Leipzig before finding its final resting place in the Tinguely Museum in Basle. To celebrate, George Gruntz wrote the three movement work "Ringing The Luminator" which he has performed as a  trio but here can be heard solo. The third movement, "Poetry of Links", written in a dancing calypso rhythm, is particularly effective.

Further originals on this CD include the ballad  "ILL used ILLusions". It was originally an aria from the jazz opera "The Magic Of A Flute", a version by Gruntz of the "Magic Flute" from the world of blue notes. "Delusions Redeemed" is a piece which Gruntz wrtoe for saxophonist Christof Lauer and the NDR Big Band.

The inclusion of two versions of one piece by trombonist Ray Anderson, with different takes, can be traced to the long artistic relationship between Anderson and Gruntz which goes back to the 1980s. The piece is called "Ecarroo", the title being simply a made-up word. The piece, by a composer according to Gruntz who is "one of the best musicians ever", is simply a "series of pathways", but which when played "becomes a out-and-out symphony every time".


Other homages in this solo gig include Thelonious Monk with a funk-imbued chamber version of "Well, You Needn’t" George Gershwin, with a beautiful smooth interpretation of the love song "I Loves You Porgy" from his opera "Porgy and Bess", Swiss harpist Andreas Vollenweider ("Under One Moon") and not least to trumpet legend with an intriguing reworking of his famous composition "A Night In Tunisia": "Dizzy’s Sh… sounds like Chinese Music" is a quote attributed to Louis Armstrong - and Gruntz allows a few memories of China to infiltrate Gillespie’s Tunisian night.

Jazz has no geographical boundaries. This is especially shown by the Swiss cosmopolitan George Gruntz, who carves out a unique work, between serious music and jazz, between Europe and America and between the traditional and the modern. In this CD you can travel with him in an exciting and especially enjoyable manner. A late masterpiece of a total artist and completely non-neutral Swiss.