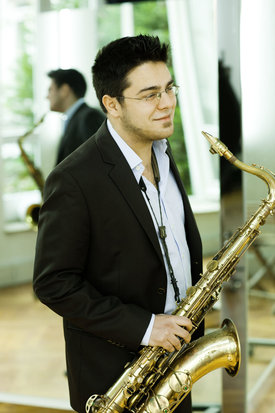 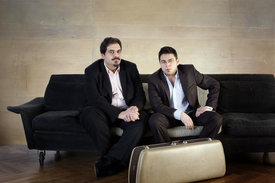 While several of the great jazz legends, including Louis Armstrong and Ornette Coleman, were self-taught, nowadays most jazz musicians have at least some academic education. Nevertheless, in some cultures there is still a tradition of learning and discovering new things through self-education. This is the case in the Romany culture, in which unconventional playing techniques and styles have survived. Given this background, the Hungarian saxophonist Gábor Bolla, who was born in 1988, has an extraordinary musical background. As a child he was a virtuoso clarinetist, but didn’t fall into any common categories. “We gypsies play a bit of everything. Just like in jazz, we improvise a lot, but in a slightly different way,” Bolla says.

It didn’t take long until he started playing the tenor saxophone and became interested in jazz. Within a very short period of time, he taught himself to play this instrument as well. A career as a child prodigy followed: at only 15 he reached the semi-finals of the prestigious saxophone competition at the Montreux Jazz Festival in 2003. Thereafter, all doors stood wide open for him. He was invited to the world-famous Vienna Art Orchestra as a guest soloist and played with US stars such as Johnny Griffin, David Murray, Kirk Lightsey and Gregory Hutchinson. In 2004 Bolla was honoured as “Talent of the Year” at the Hans Koller awards, a kind of Austrian Grammy which is very seldom given to non-Austrians. A year later his quartet received both the jury and the audience prize at the Avignon Festival.

Gábor Bolla has had some impressive and defining stages in his life that are brought to bear on his ACT debut “Find Your Way”. Joining him on the piano is Robert Lakatos, his alter ego and musical soul mate. Bolla got to know the pianist at a jam session when he was 14. His roots also lie in the Romany culture, but unlike Bolla he received a classical education.”Nevertheless, we have the same taste in music and we think similarly,” Bolla says. “We are like brothers.” The quartet is completed by the Swiss jazz stylist Heiri Känzig on bass and by the world class drummer Jojo Mayer. In addition, the violinist Lajos Sārközi appears as a guest.

“It is the most important thing for me to play the music I truly like the way I see it. I always try to find new things. I certainly haven’t found my goal yet. I wonder if I ever will? It is definitely a long journey…,” Bolla says thoughtfully. Searching and discovering as well as truly getting to know yourself and your sources for musical inspiration are Bolla’s guiding themes. “Find Your Way” is an impressively expansive and yet cohesive musical journey.

Interestingly enough, especially bebop has been an important source of inspiration; all the famous musicians who have managed to redefine themselves again and again over the years. The five exceptional musicians on the album are equally creative; they take something familiar, put it through their own filter, reconstruct it and discover whole new dimensions in it. This can he heard especially on tunes by Bolla’s great role models Sonny Rollins (“East Broadway Rundown”) and Thelonious Monk (“Bemsha Swing”, “Evidence”).

“We want to speak the language of jazz. But we always try to bring in our own unique music, as well. On this album we wanted particularly to present my gypsy background,” Bolla comments on “Find Your Way”.

Bartók, Monk, Rollins and Coltrane, Modern Jazz Quartet, Stevie Wonder or Django Reinhardt – it doesn’t matter where the young Hungarian’s inspiration comes from on his search for new sounds and for a musical identity of his own; with “Find Your Way” Gábor Bolla is clearly on the right track.