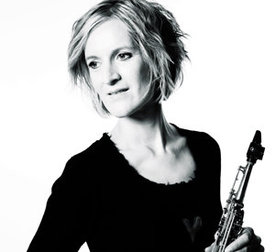 For her 2010 ACT debut “Cycle of Silence” (ACT 9491-2) Norwegian saxophonist Frøy Aagre focuses fully on the soprano saxophone; a form of self limitation which fully brings to bear the captivating naturalness of her incredibly mature music. Her “Nordic Jazz” tells of an expectant calm, sharpened perception and distances which give space to breathe. Modern jazz elements are skilfully intertwined with classical music; beautiful melodies accompanied by adventurous arrangements and her warm saxophone sound and seductive lyricism captivate the listener.

“so easy to listen to, so engaging (…) like a soundtrack to a great movie” (jazzreview.com)

Frøy Aagre has long been critically acclaimed for her powerful compositions and her individual style of characteristically lyrical Nordic jazz. Her distinctive quality lies in blurring the boundaries between the written and the improvised. Aagres themes and phrases are often invocative of Bach in their enticing lyricism, while their execution and delivery echoes Wayne Shorter at his most playful. (Jazzwise, UK)

Aagre studied saxophone at the Birmingham Conservatory, Middlesex University and with Dave Liebman. She also studied the composition techniques of the 20th century at Oslo’s music academy and learnt about Schönberg’s methods as well as Messiaen’s synesthesia. “My music may sound Norwegian but I have collected influences for it from all over the world.” Aagre describes her style. Before the release of her ACT debut, Aagre had already released two acclaimed albums; Katalyze (2004) and Countryside (2007). The last was named one of the top ten jazz albums in 2007 by the Norwegian newspaper Dagsavisen.

Her group consist of some of the finest young musicians on the Norwegian Jazz Scene (Andreas Ulvo: piano, Audun Ellingsen: bass, Freddy Wike: drums) and they “truly functions as a band, each member playing off one other and, above all, serving the songs." (AllAboutJazz, US).

Her international reputation is growing. Aagre and her band was one of six jazz acts worldwide to be selected to play a showcase at the prestigious arrangement ”MIDEM Talent Jazz” at the international music fair MIDEM in Cannes January 09. In November 08, Aagre did a successful UK tour that included sold-out performances at London Jazz Festival with trumpet legend Kenny Wheeler. In October 08 Frøy was fronted as one of the main artists at the jazz festival Earshot Jazz (Seattle, USA), besides Cecil Taylor and Carla Bley.

Frøy Aagre was the first saxophonist ever to perform at Stortingssalen (The Norwegian Parliament building) in Oslo in October 06. She has performed for Excellencies like Governor General of Canada, Queen Sonja of Norway and all the Priministers of the Nordic Countries.