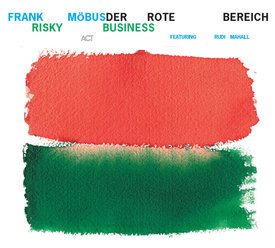 A gasp went up in the German newspapers’ arts pages when "Love Me Tender", Der Rote Bereich’s first album on Act, was released. Frank Zappa once stated that "Jazz isn’t dead, it just smells bad". The music of guitarist Frank Möbus’s trio is alive and kicking, and it has no hint of that "bad smell". Instead: rattling compositions, curving, twisting solos, screaming group interplay - music as a roller-coaster ride. In this case a ride where you’re facing backwards - you can’t see the next loop coming. Whether it’s New Thing, rock ‘n’ roll, or twelve-tone rows, the three men with the long sideburns and over-the-top suits have raised volatile insinuation to the level of a stylistic device. So buckle up and listen even more closely, otherwise you’ll miss everything. That went for before, that goes for now.

Because, after a solid year packed full with tours throughout Europe, the ride continues with "Risky Business", recorded in March 2002. You have to conduct a little etymological research to get to the meaning of the title. "Business" comes from "busy". Even more things are happening here simultaneously than on the previous CD. In many of the pieces Möbus has set up a looping device, so that in some sections there are two sections running against each other. Möbus says that  "This play with the machine is already set into the composition. It’s as if we three are spinning around this unshakeable pulse."

A roller-coaster that is so dangerous that not everyone can keep his place. And so Der Rote Bereich has a new drummer, 25 year old Oliver Bernd Steidle. Like Möbus and Mahall he’s from Nuremberg, and is also now part of the lively Berlin scene. Möbus is delighted: "I was on tour with Bernd’s band a year ago, and it dawned on me that with him the complex rhythms would become comprehensible - he anticipates the composition’s form. Now each player knows when he needs to give something to the others."

You can hear it on the opener, "Mein Sportheim", a piece that summarizes the recording. Here the band sounds even tighter than before. Two metres (4/4 and 6/8) run against each other while Rudi Mahall links up a third in his solo. Whereby the word "solo" misses the mark. Möbus: "In the improvisation it isn’t about the individual player any more; it’s about the overall sound. Solo and accompaniment switch back and forth from moment to moment, and the solo itself always has an accompanying function."

Der Rote Bereich has taken two classics out of its repertoire and reinterpreted them. This includes the forceful ballad "Feijoada De Chocos", a piece the band had recorded for their third CD on the small "Jazz4Ever" label. But the lyrical side of Der Rote Bereich also has its dangers. Steidle alternates between 5/4 and 7/4, Möbus accompanies the whole thing in 4/4, while Mahall jumps back and forth between the different time signatures. But the main focus of "Risky Business" lies in the rediscovery of rock influences. Möbus, who wrote most of the pieces, now drags a big Marshall amp to the concerts since "the strength of the electric guitar lies in Rock". But this is also something that Der Rote Bereich intimates rather than states outright.

To play straightahead rock would be too easy, not risky enough - even when it would be good for business!