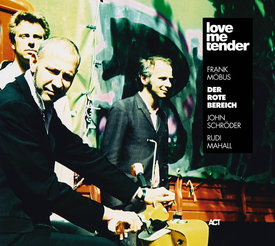 When writing liner notes it’s always difficult figuring out ways to promote a group without falling into the usual cliches - every group is innovative, the players maestros, the playing masterful, and the group interaction intuitive to the point of being extra-sensory. In this case, however, such praise is no hyperbole. Der Rote Bereich literally translates as "the red area", and is a referral to the red zone which indicates distortion on the recording level meter of most recording machines. The Der Rote Bereich is appropriately named; the group’s music brazenly skirts the outrageous as it traverses the ground between the sublime and the ridiculous. The group was founded in 1992 in Nuremberg by guitarist Frank Möbus along with bass clarinetist Rudi Mahall, and almost immediately acquired cult status among jazz cognoscenti. The Rote Bereich has since gone through several transformations before settling in Berlin as a trio with drummer John Schröder.

The three have impressive credentials. Frank Möbus studied at the renowned Berklee School of Music in Boston. He has since played with the likes of Kenny Wheeler, Ray Anderson, Maria Joao, Herb Robertson, and drummer Jim Black. Rudi Mahall is one of the few musicians I know who has absorbed the music of Thelonious Monk, Ornette Coleman, and Eric Dolphy. He plays with pianist Aki Takasi in a duo which concentrates on Dolphy’s music, and works with Alexander von Schlippenbach, Paul Lovens, and Conny Bauer. John Schröder has been playing professionally since the age of 15. The masterful multi-instrumentalist plays drums, guitar, piano, and bass, and has worked with Chet Baker, Randy Brecker, Joe Lovano, and Herb Geller.

Besides extensive tours, Der Rote Bereich has appeared at a number of important festivals like in 1999 the trio appeared at the Bell Atlantic Jazz Festival in New York, the Berlin Jazz Festival, and the Trytone Festival in Amsterdam.  They have recorded three CDs. The current production, Love Me Tender, is their fourth, and the first with ACT. To my ears it’s their best yet. The music can’t be pigeon-holed; the influences are eclectic and universal - and the three cannibalize anything that suits their taste at the time. Yet the sounds contain a uniquely European flavor. Möbus makes the point that the music the trio plays could only come from a German group - (living in Berlin). The music this group is making is as fresh (in both meanings of the word) and innovative as any thing on the current world scene  - the day has passed when the rest of the world must look towards America for every innovation and inspiration in jazz-influenced modern music.

All three contribute individual compositions to Love Me Tender, but in a sense, given the freewheeling disregard for conventional jazz structure and the interplay between the three, each piece is a spontaneous communal composition.

I talked about the recording with Frank Möbus one evening not long ago. Here are his of his comments on some of the pieces:

"Leba, si? Is a Portuguese play on words - It’s the kind of tune I normally wouldn’t record - it’s almost too sweet, but it somehow works with this band."

"Lizard is clearly structured. It’s based on different ways of understanding the melody through different time structures."

"The first part of Love Me Tender is freely improvised, and moves towards the melody, which I re-harmonized. We tried to find a way to play this kind of tune within the context of this group."

"The title 50.000 Kleine Wichtigtuer refers to all those who are filled with their own self-importance" (Many listeners assumed the title referred to music critics, but Frank claims that idea was furthest from his mind).

"Simple has a country feeling with a weird melody. John plays drums and guitar simultaneously on this piece, as he does on Wer Konnt Mehr Vom Sozialamt? It’s kind of like the Rote Bereich’s version of a street band."

"Ein Tag im Leben des jungen L. (A day in the life of the young L.) was written for my son Laurenz. It’s an impression of a day in his life when he was a baby."

"Franken Global has a dark color. It feels slow even though it’s not, and has a connection with the Franken mentality, which is the area of Germany Rudi and I come from."

"Zambujeira Do Mar is in the south of Portugal. Rudi and I have both spent time there. It’s a fantastic place - very quiet by the ocean and mountains; I’ve had a lot of out experiences there.

"I liked the Neue Deutsche Welle movement - the music that originated in Berlin in the 80’s - simple guitar riffs - it was a long way from the slick American product of that time. Berlin/Mitte captures some of that."

Der Rote Bereich has developed a uniquely personal music that is as expressive and wide-ranging as the furthest limits of our senses. It may challenge some musical pre-conceptions of what can and can’t be combined or torn apart, used or abused, but after all what’s life without a few surprises, a little excitement, a little danger.