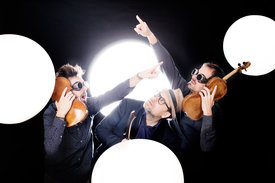 German violinist, composer and arranger Florian Willeitner is on a mission of creating a symbiosis of worldwide musical traditions. The master student of star violinist Benjamin Schmid has traveled all over the world since he was 19, from 2010 on, to study various musical cultures. Even during his classical studies he experimented with new orchestral models (for example in his Violin Concerto No. 1, which was premiered at the Wiener Musikverein). With his “New Piano Trio” he has been refining cross-genre composing and -playing for many years. In 2018 he founded the "Pool of Invention", an international artist collective with which he has since devoted himself to highly efficient trans-cultural art and is the creative partner of important festivals such as the Mozart Week in Salzburg directed by Rolando Villazon. With his latest project “First Strings On Mars” Willeinter creates yet un-heard chamber music, together with double bass player Georg Breinschmid and violinist Igmar Jenner. A celebration of musical freedom and curiosity, full of virtuosity, energy and diversity.

“I don’t think I have ever known a musician with quite the level of openness to people, to emotions, to musical languages, and the capacity to make them his own as Florian Willeitner. He is a stunningly good violinist, and I discover something new every time I hear him.” Paul Zauner, Founder & Artistic Director, INNtöne Festival

In the past the violin in jazz could sometimes seem a bit exotic, even outlandish, but all that has changed. Classical music and jazz are no longer mutually exclusive worlds; these days they enrich each other, and it is the norm for string instruments to take centre stage. The ACT label has played its part in this transformation, with artists such as the Bartolomey/Bittmann duo, the radio.string.quartet.vienna and the incomparable Adam Baldych among the pioneers who created the paradigm shift, and who continue to take their music in new directions.

And yet, as violinist/composer Florian Willeitner from Passau in Southern Germany sees it, there is still further to go: “The full potential of the violin, with its unique versatility and its kaleidoscopic possibilities of timbre and texture, is rarely to be heard in conventional jazz settings.”

And from this he has derived his credo as both composer and instrumentalist: “It is my firm belief that in order to write music which uses the violin’s great spectrum of possibilities, it is crucial not just to have an awareness of the classical tradition, but also of the many other cultures which feature string instruments prominently and in which unique approaches and techniques have been developed. To blend these different ingredients into a transcultural style which is respectful to each of these distinct traditions is what inspires me.”

Willeitner, who was the star student of top violinist Benjamin Schmid, has been travelling the world and studying a wide variety of different musical cultures since the age of 19. During his classical studies, completed in 2017, he experimented with new ways of writing for orchestra, notably in his Violin Concerto No. 1, which had its first performance in the Vienna Musikverein. With his “New Piano Trio” he has spent several years refining this cross-genre composition and performance. In 2018 he founded “Pool of Invention”, an international artists' collective. With this collective he has focused his efforts on highly efficient transcultural art. The collective is a creative partner of leading festivals such as Mozart Week in Salzburg, directed by Rolando Villazón.

With his first album on ACT, we witness a first culmination of these endeavours: a trio project with Florian Willeitner and two similarly inclined musicians who are also opening up new paths for stringed instruments:

They are, on the one hand, violinist Igmar Jenner, who founded the string orchestra “String Syndicate” during his classical training at Graz, and whose enthusiasms venture into genres such as tango and Irish folk. Igmar has been a member of the radio.string.quartet for 10 years. His duo with Slovenian accordionist Borut Mori won the 2010 Austrian World Music Award.

The third member of the trio is legendary double bassist Georg Breinschmid, who gave up his permanent position with the Vienna Philharmonic Orchestra because other things were more important to him: musical freedom and what he calls “a carefree approach to music.” Since then he has opened up to genres from blues to ‘Wienerlied’, and is a pioneer in combining jazz-inspired composition and performance with that particular kind of ironic humour which the Viennese call ‘Schmäh’.

Here we have the perfect line-up for “a feast of musical freedom and curiosity," as Willeitner calls "First Strings on Mars.” And if that sounds like hyperbole, it isn’t. There has never been a string trio with a range of sounds and techniques like this, nor players who can respond so effortlessly to one another's ideas. It begins with Willeitner's “Novemberlicht”, simultaneously poetic and powerful. Then we hear Sting's “Fragile”, in a version that breaks all the boundaries of string-playing, Breinschmid's exquisitely tender “Reminiscence”, Willeitner's mysterious “Dark Romance or The Short Life of Mister Gimli Hope”, his folky pop song “The Green Wind”, Breinschmid's virtuoso reinterpretation of alpine folk music with “The Swindler” and “Hochkar” - and finally a yodel into which the sounds of "Ho Chi Minh” have been smuggled.

Willeitner's hard-grooving tune “Brazil Imported” has it all: the trio show the range of techniques, tempi and thematic variety that is possible with their combination of bass, violin, mandolin and soulfiddle (an instrument custom-made by Weilleitner's friend, luthier Valentin Kaiser). And again when they dig hard into “Searching” by Georg Breinschmid, they bring us back what this album is all about: “Our goal as a band,” says Willeitner, “is to be traditional in the best way. To learn from the past while writing for the future. To push the limits of our instruments. And to be the First Strings On Mars.” They're already well on their way.