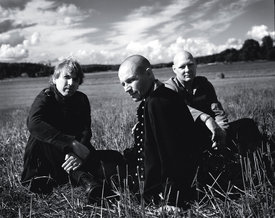 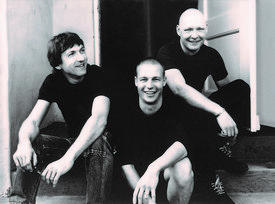 “...and finally evening comes. We usually meet in the dressing room. Magnus’ drumsticks are pattering against his legs. Åke is talking—saying something about different sound systems or complaining about the US and Bush. Dan and I are jumping up and down to get our energy going. Then we go on stage, meet the audience, the music. Timeless, without a program, without a set list. We want to be open to what fits just then. Sometimes nothing comes to mind and it’s frustrating, but things always work out and it is definitely worth it [...] because when it does we can just go with the flow. Then it’s the music that carries us and we just make ourselves available. It’s fantastic, near religious I suppose. All of a sudden we can hear ourselves playing things we’ve never played before. And suddenly colour returns to life. When that happens I think the audience feels it too. They and we get to be in on something that will never happen again, that’s impossible to recreate. Sometimes you fall into that trap anyway, wanting to recreate, to repeat what was good. It’s almost always doomed to fail. The present cannot be recreated. We have to be content to be in it while it’s happening. And every evening there’s a present that’s waiting for us. We know that it’s going to be different from what made it good yesterday, but what is fantastic is if we can forget the past and just be. Now.”
- Esbjörn Svensson (excerpts from the Swedish Radio programme "Sommar")

On 10 October 2001 the Esbjörn Svensson Trio e.s.t. played a concert at Gothenburg Concert Hall in Sweden. Thereafter, Svensson would always refer to it as one of the very best that the trio ever played. The recording of that performance is now appearing for the first time as the album "e.s.t live in Gothenburg", and it was indeed, as Svensson described it, one of those very fortunate moments. Everything just flows naturally, the energies of the musicians and the listeners inspire each other, boundaries between composition and improvisation become blurred, melodies follow through seamlessly from the tunes and into the solos. At this point in its development, e.s.t. as a band has coalesced and found a genuine sense of unity. The tunes serve as mere starting points for the musicians to head off without any fixed ideas as to where they will end up. What is clear is that each of them is fully enjoying every step of the journey.

On "e.s.t. live in Gothenburg", Esbjörn Svensson, Dan Berglund and Magnus Öström explore and expand the repertoire from their albums from that time, "From Gagarin´s Point of View" and "Good Morning Susie Soho". This was a period in which the foundations were laid for what would mark a glorious, and ultimately a tragic episode in the history of European jazz. E.s.t. was well on the way to becoming probably the most important European jazz band of the noughties. As the band got to play in larger halls and at bigger festivals, e.s.t.’s music became more ecstatic, rockier and more hook-based. "e.s.t. live in Gothenburg", documented by sound engineer Åke Linton who was the hidden fourth member of the band, has compellingly caught the point of transition of the acoustic jazz trio e.s.t. into the one-off phenomenon that they were to become, setting jazz off in new directions and bringing it to new and younger audiences for most of the following decade. Whereas the two previous live albums "e.s.t. live in Hamburg" and "e.s.t. live in London" have a tendency to to show the band’s bigger, concert hall sound, "e.s.t. live in Gothenburg" documents the trio at an earlier stage – with more emphasis on fine craftsmanship, a sound-world that is acoustic and in places almost weightless, influenced both by jazz and classical music. There are also some early pointers to the future in rock and electronica, especially in the second half of the concert.

"e.s.t. live in Gothenburg" makes audible what Svensson means by ‘being in the moment while it happens’. The live versions of the pieces depart significantly from their studio counterparts. In extended collective improvisations and unaccompanied solo passages, music which is completely new and unimagined emerges, seemingly without any effort or interruption. The range of dynamics is wide, there is a genuine band sound and a sense of groove that remain unmatched to this day. A music in which jazz becomes audible more than just an attitude, a specific aesthetic or vocabulary. And jazz itself is just one of the many elements that make up a big picture which includes European classical music, rock, drum'n'bass, minimal music, indie rock and much else besides.

The shot in the arm that e.s.t. gave to jazz, and especially to European jazz, and to the format of the piano trio continues to this day. Widespread enthusiasm for the band's music is undimmed. It may sound like a truism, but Esbjörn Svensson really has become immortal through his music... and through his recordings, which have such a freshness and an excitement about them, it is as if they have just been made... and through the influence that he continues to exert on jazz and especially on the jazz piano trio, both directly and indirectly. "e.s.t. live in Gothenburg" shows why this is true – and does so compellingly: with originality, power, refinement, fantasy, and playfulness.