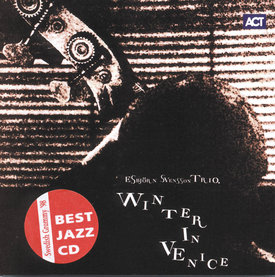 This year isn’t the first time that Esbjörn Svensson has stood on stage in Montreux. He was already a guest in the summer of 1998 at the jazz festival on Lake Geneva. At that time he was a member of the Nils Landgren Funk Unit. He had left his piano in Sweden in favor of the Fender Rhodes. Svensson’s feel for the right sound at the right moment and artful ease of style helped make his trombone-playing countryman’s concert a success. Lots of applause, ample praise, and a refreshingly direct jazz-funk CD were the reward for all the work (Nils Landgren Funk Unit: "Live in Montreux", ACT 9265-2).

The line-up’s crisp, concise work is only one side of Svensson’s talent. Born in 1964 in the Swedish town of Västeras, the pianist and composer belongs to the handful of original stylists of the modern jazz piano. He digs into the mountain of tradition with the curiosity of a musical prospector, and with clarity and wit sifts through its ringing fragments. Some motives seem to be familiar, some changes are commonplace; nevertheless, the musical effect is unique, occasionally eccentric, emotional, impulsive. Svensson only hints at his connection to players from Bill Evans to Keith Jarrett as he adds their innovations to his own inventory of improvisational styles. The rest comes

from intuition based on solid musical analysis, which allows his musical world to evolve on solid, self-sufficient ground.

Svensson enjoys experimenting with the details. Besides that, he has the good luck of working with a trio that shares his enthusiasm for taking paths seldom traveled. Already in his youth Svensson, along with his childhood

buddy Magnus Öström on drums, had extensively honed his skills in the rock idiom, and had developed a symbiotic surety playing together with Magnus. That’s why  Öström was also an original member of the Esbjörn Svensson Trio (EST), which was formed in 1990. Bassist Dan Berglund joined three years later. The musicians use the fortuitous occasion of their similar tastes to fuse their personal qualities into a coherent overall form. The strength of a working band gives them a relaxed naturalness which is a far cry from the glitzy artificial sheen of being hip. EST shines through concentration, precision, and above all through the spirit of a joint aesthetic framework. Jazz is again an experimental adventure where parallel paths and innovation, false turns and success are allowed.

So in July 1999 the pianist found himself once again in Montreux, this time as leader of his own band. In the late hours of the evening, as most of his colleagues were already cavorting with their drinks at the bar, Svensson, Berglund, and Öström climbed onto the stage. As they had already done weeks before at the Jazz-Baltica Festival in Salzau, they were able to quickly create a bond between themselves and the people in the Miles Davis Hall. With the material of their recent CD "From Gagarinís Point of View" in tow, they invited the late-night audience to a delightful, colorful spectrum of sounds, alternating between groove and modern, contemplation and freedom, contrast and harmony. Once again they were greeted with a storm of enthusiasm, despite the late hour.

With the success of the live performances and the enormous media response to the release of "From Gagarinís Point of View", ACT determined to make an earlier album of EST available. Originally released in 1997, "Winter in Venice" (ACT 9007-2) is the band’s fourth CD, following "When Everyone Has Gone" ((Dragon, 1993), "Mr. And Mrs. Handkerchief" (Prophone, 1995), and "EST Plays Monk" (BMG, 1997). "Winter in Venice" is at the same time the group’s first CD, in that it is the first independent profile that exhibits the three musicians in their present form. The 13 original compositions show them as sensitive masters of communication with the penchant for transforming simple, pretty melodies into complex networks of motifs. Sometimes balladic, sometimes joyously swinging, "Winter in Venice" lays out a lively tonal tapestry which, despite its suggestive title, seems to have little to do with the morbid feeling that exists in Venice during that dark time of year. It received the Swedish Grammy in 1998 as best jazz album of the year, and on top of it all, it helped Svensson to the title of Songwriter of the Year. And like "From Gagarinís Point of View", it is a collection of chamber-jazz rhapsodies that leaves the listener a lot of room for internal and external impressions, associations, and discoveries.