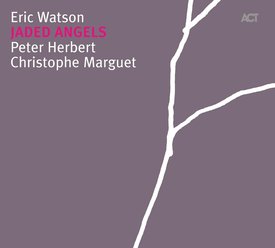 Although you won’t find him if you look up his name in one of the usual jazz-dictionaries like the Rough Guide Jazz (“The ultimate guide to jazz”), it’s a very different story in his chosen country of residence. Eric Watson has lived in France since 1978, and has received various distinguished prizes like the “Chevalier des Arts et des Lettres” for his work in furthering the cause of jazz. He is curator of the festival La Villette and a respected teacher. “The audience in Europe has always inspired me. The Germans know a lot about music, and are not afraid of anything new. The French in general have a great thirst for culture. I’ve always felt very comfortable here.” Watson is an avid performer of the music of Charles Ives, and may find consolation in the fact that Ives’ masterpieces were only discovered thirty years after they were written.

Watson’s music has always remained firmly rooted in the American tradition despite his many years in Paris. Curiosity and his willingness to take risks have been distinguishing characteristics of all of Watson’s journeys in and around the piano. Polytonality, clusters, unusual rhythms, and complexity in his thematic construction; most of the jazz-piano innovators (Bill Evans, Thelonious Monk, Lennie Tristano, Mal Waldron, Elmo Hope, Herbie Nichols, McCoy Tyner, Paul Bley, Cecil Taylor, Don Pullen and others) have left their mark on Watson’s music. “I never did have much patience for politically correct jazz pianists”, he says, laughing.

After studying at Oberlin conservatory Eric Watson avoided the minefield of the New York jazz club circuit, and went to Paris. “Under no circumstances did I want to play music in front of diners. I came straight from conservatory, from playing with a dance company and I felt fresh and unbiased.” In 1982 Watson made “Conspiracy”, a trio album with Paul Motian and Ed Schuller, soon to be followed by two strong solo albums. A long and fruitful collaboration with bassist John Lindberg began in the same year, a game with no rules, no limits, soon to be enhanced by saxophonist Steve Lacy. “Lacy was crucial to my development, he confronted me with my weaknesses and taught me things that had completely eluded me before. I learned a lot about melody from him, and I think a lot of this came from his time with Monk. Steve taught me the value of simple melodies as a resource for improvisation. He always said most jazz tunes contain too many chords.” A groundbreaking trio with Marc Dresser and Ed Thigpen (“Silent Hearts”, 1998) evolved into the explosive music of the – sadly short-lived – “Full Metal Quartet” (1999/2000, with saxophonist Bennie Wallace) and for the album “Road Movies” (2003, ACT 9429-2) with Christof Lauer on tenor sax.

Watson loves to toy with complex formal structures (“Wear and Tear”, one of his themes, is based on the structure ABCDCBA!). But his current release, the trio album “Jaded Angels” shows impressively that he is a great ballad player. The great portraits “Ice Lady” and “Consolation” protrude from the album’s middle section like gigantic mountains from a vast landscape. The quality of the recording is impressive, and accurately reflects the pianist’s celebrated crystalline tone. The new trio is a special stroke of luck. “I like working with players who constantly strive to surpass themselves and increase their scope. It is not easy to get into my music, that’s why I cherish long-term collaborations. The players tell me my music is very challenging. They say it requires the concentration of a classical musician and a complete freedom, a jazz musician’s willingness to give oneself over completely to the music.”

Watson has been working with drummer Christophe Marguet for more than five years now. Marguet counts as one of the most in demand drummers in France (his credits include among others, Claude Barthélemy, Henri Texier, François Corneloup and Sylvain Kassap), and he has also made a name for himself as a bandleader and highly original composer for his own trio and sextet.

“Jazz is a very open music. The people who are playing it are constantly reinventing it. Never mind what happens, they will continue to play this music. You can’t keep a real jazz musician down.”