Eric Schaefer
Who Is Afraid Of Richard W.? 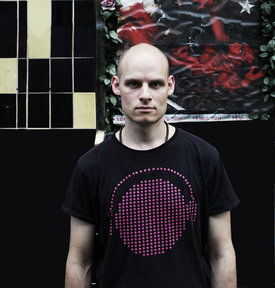 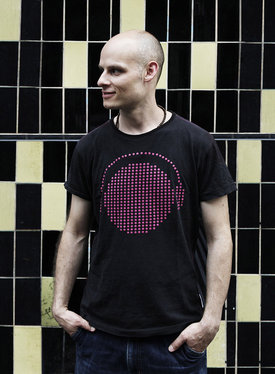 Michael Wollny and Eva Kruse certainly won't take it personally when we say that Eric Schaefer stands most clearly for the pop element and humorous undertones in the trio [em], "Germany's most creative jazz trio" (Kulturspiegel). This Berlin drummer "has proven uncompromising vitality in totally different directions such as free improvisations and classical compositions, punk and diverse folklore, new music, minimal music, pop and electronic" (Neue Zürcher Zeitung), and in the widest range of band projects away from [em], from "Soulmate" and "Henosis" to "Johnny La Marama" and the Arne Jansen Trio. Schaefer always makes use of the entire pallet of more recent music history, his drum set enhanced with percussion instruments, many of which he made himself, and electronics, to create his very own personal sound mix, which the newspaper Die Zeit says makes him one of "the secret central stars of the […] German jazz scene".

And yet it is surprising to see what Schaefer has chosen to put on his first solo ACT album: With "Who is afraid of Richard W.?" he takes on without doubt the most controversial and monumental of all opera composers. Richard Wagner's 200th birthday is merely the occasion; the reasons for doing so are much more profound: "I have heard my way backwards over the last decades," Schaefer explains. "First I played Ravel and Debussy in the orchestra, then I discovered Mahler, and through him I then finally found many things in Wagner that I actually already knew, but that I hadn't heard from him with that intensity before. I first fell in love with the preludes: Lohengrin, Tannhäuser, Tristan and Isolde." Although strictly speaking the connection had been made much earlier than that: "As a boy I loved "What's Opera, Doc?": The Ring in a ten minute cartoon with Bugs Bunny and Elmer Fudd. If you've got a sense of humour that's a little bit crazy and you approach the material with love for it, you can interpret Valkyrie like that," Schaefer recounts with a wry grin. And indeed, the occasional flashes of humour in "Who is afraid of Richard W.?" are a way to lend the grotesque monumentality a certain approachability and relevance for everyday life.

"Wagner is of course an enormous weight, a colossus, a Titan who rolls inexorably toward you. In his oeuvre there was a struggle for the right to interpret everything from Nietzsche to Adorno and Thomas Mann, through to Jonathan Meese. And that's where I come to my affinity for jazz. Jazz is also a subversive kind of music that breaks through totalitarianism. From this perspective, liberated from maximalism, you can generate a new standpoint that makes Wagner possible," Schaefer explains.

And not only that, the variability of today's jazz, for which Eric Schaefer also stands, drags Wagner right into the present, from the Bayreuth hill and into the club. As a lover of dub step, hip hop and electronic music, Schaefer puts the operatic themes of this artwork romantic into a grooving context. "It was totally natural and simple for me," Schaefer says, "because the melodies are so flashy that I immediately had ideas about how I could use them and the emotions and dramaturgy they contain." So already in the "Prelude" the organ billows, a synthesizer paints music of the spheres, a clear, reverberating West Coast jazz trumpet presides over the events. The "Lohengrin Prelude" with its psychedelic sound from the seventies is also cheery, for which Schaefer sets the rhythm with slowly rolling, bouncing drums. They Valkyries for their part ride up in a heavy dub groove, like "Nietzsche In Disguise" as well, and Siegfried also prepares himself for battle with reggae. "Isoldes Liebestod" and "Tristan's Trauer" become chilled ballads, shaken up with percussion.

With the young British trumpeter Tom Arthurs (who has already won the BBC Jazz Award three times), keyboarder Volker Meitz, and avant-garde bassist John Eckhardt, Schaefer has put together a quartet that is obviously ideal for this, and that he can introduce himself with the necessary enthusiasm: "We come from totally different places. Tom is deeply rooted in the jazz tradition, playing with people like John Taylor and Fred Hersh. He has that incredible melodiousness, the sensitivity and the humour to be able to play those melodies that have been heard a thousand times, in a way that sounds fresh. Volker plays a key role with the organ because it is able to be monumental and represent the orchestra like no other instrument. He comes from the club direction, from the refined, soulful, groove-oriented camp, has worked together with Sonar Kollektiv and made remixes of 4hero. John on the other hand is a sought after new music bassist, and has gathered experience in putting romantic music into a contemporary context, for example, in the Ensemble Modern, Klangforum Wien and musikFabrik NRW."

When Schaefer says "It all added up to an appealing mix for me," it is a huge understatement. Seldom did classical music sound so fresh. Never has anyone mastered the monumentality and the most subtle emotions in Wagner's work so fascinatingly and casually – thanks to the persuasive concept that breathes new vivacity into the old master with infusions of progrock and new wave, ambient and dub: Welcome to the club, Mr. Wagner!