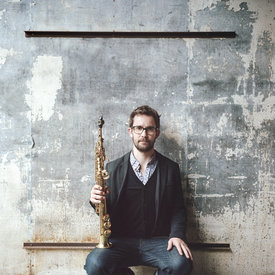 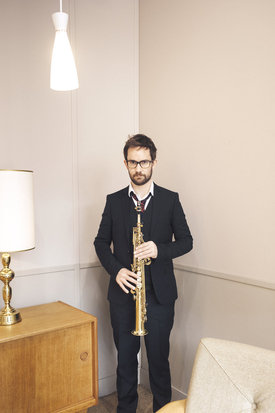 The French jazz scene has a vitality, an originality and a do-it- all and do-it-anyway mentality about it right now. It is French musicians who are blazing the new trails for contemporary European jazz. There is a wonderful open-mindedness towards all musical cultures, genres and tendencies; and yet French musicians also give off the sense of having a proper grounding in their own tradition. A musician who represents all of these tendencies ‘par excellence’ is saxophonist Emile Parisien. Born in Cahors in the wine-growing region of the Lot, he is a jazz visionary. He may have one foot in that ancient soil, but his gaze is firmly fixed on the future. The leading French newspaper Le Monde has called him “the best new thing that has happened in European jazz for a long time,” while the Hamburg radio station NDR made the point of telling its listeners to give Parisien their “undivided attention.”

The reference points on Parisien’s personal musical map are very widely spread indeed. They range from the popular folk traditions of his homeland to the compositional rigour of contemporary classical music, and also to the abstraction of free jazz. And yet everything he does has a naturalness and authenticity about it. Rather than appearing pre-meditated or constrained, his music has a flow, he traverses genres with a remarkable fleetness of foot and an effortless inevitability.

What is it that makes the simple urgency of Parisien’s music quite so enjoyable? How does he manage to combine a provocative and anarchic streak with such a captivating sense of swing? Anyone who has seen and heard him on stage will know: it is because he lives his jazz with body and soul, because there is an authenticity and honesty inflecting every breath and every note.

The track “Clown,” in which the playing of Vincent Peirani is to the fore, led to the following reflection from Parisien: “Because the melodic line in our music is so strong and prominent, we can improvise with a fantastic degree of freedom. From our background in jazz, the build-up of intensity is something completely natural to us, but we also dip into the language of the European free scene, and we have the common backdrop of traditional music, and of rock and pop as well.”

Parisien didn’t have to hang around on the scene very long before the awards started arriving. He picked up Artist of the Year in both of the most important jazz prizes in France. He received the Prix Django Reinhardt in 2012 and then the Victoires du Jazz in 2014. In Germany in 2015 he received the ECHO Jazz Award for Best International Ensemble for the passionate virtuosity of the duo which Parisien has with his close friend and musical brother-in-arms, the accordionist Vincent Peirani.

His regular quartet has been working together for more than ten years and played countless concerts all over the world. So perhaps it was the right time to try something new. A re-formed quintet had its very first try-out at a ‘carte blanche’ session at the Marciac Festival in 2015. Parisien was understandably keen to use this opportunity to work with that great pre-eminence of German jazz Joachim Kühn, not least because of the Leipzig-born pianist had worked for many years in a trio with a musician who had been another of the key figures along Parisien’s path to success, the veteran drummer Daniel Humair, in whose quartet Parisien is a regular member.

Kühn’s long and distinguished career has found him in establishing working relationships with saxophone greats such as Ornette Coleman, Archie Shepp and Pharoah Sanders. This time, the reeds master he is working with is almost forty years his junior. That age difference didn't stand in the way of an instant creative symbiosis between them: the sparks started to fly in the concert hall from the get-go. With his new band-mates, guitarist and rising star Manu Codjia, bassist Simon Tailleu and drummer Mario Costa, they traversed through free improvisation, found moments of coruscating energy, painted emotional pictures in sound, as they discovered the volcanic energy, humour and sheer quality in each other...a new band was born.

“Sfumato” is the result of what happened once this dream team found their way into a studio. In addition to Peirani, French jazz legend and mentor to Parisien, Michel Portal, joins the ensemble. What results is a group which brings generations together to create a sound-world rooted in the here and now.

This is music in which the untrammelled imaginations of players and of listeners can roam in complete freedom, and will experience the joy of new discoveries.