Europe has a new jazz star 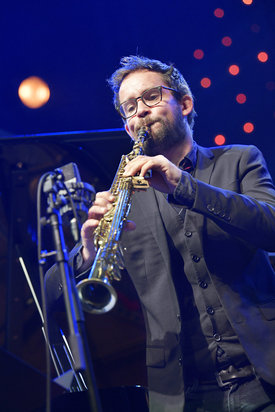 Recorded live in concert by Nicolas Djemane at Jazz in Marciac on August 8th, 2017

Mixed by Boris Darley in April 2017
Mastering by Klaus Scheuermann

French soprano saxophonist Emile Parisien is one of the most highly regarded European jazz musicians of our time. The three albums he made in just three years – “Belle Epoque” in 2014, “Spezial Snack” in 2015 and “Sfumato” in 2016 – have propelled him, at the age of just 35, to the top of the worldwide rankings on his instrument. One thing is abundantly clear: Europe has a new jazz star.

2017 was the year for Emile Parisien. No jazz artist received more prominent acclaim in his home country France, and beyond. Very few European jazz artists can have appeared at so many big jazz festivals and classical concert halls. Emile Parisien today is regarded the most important innovator on the soprano saxophone.

Right at the beginning of 2017, Jazzthing magazine (DE) set the tone with their CD review: “It is amazing how quickly Emile Parisien has become one of France’s most influential musicians. “Sfumato” is the title of the new album from the 34-year-old soprano saxophonist, who has nothing to fear from the competition of anyone of his own generation anywhere in the world. And this album is going to amplify the buzz about him which is starting to echo around Europe.” And that was exactly what happened: not long after the release, the French “Jazz Magazine” and German music magazine “Stereo” both voted “Sfumato” as their album of the year. Shortly after that, Emile Parisien received the “Victoires Du Jazz”, the jazz prize for album of the year at the most important French music awards.

In Germany Parisien also received the most important music award, the ECHO Jazz, for “best international saxophonist” of the year. Topping out an outstanding year, French “Jazz Magazine” chose Émile Parisien as its artist of the year for 2017.

Deutschlandfunk Kultur (Germany) called Parisien a “superstar of the jazz scene in France”, Fono Forum (Germany) stated: “Emile Parisien is taking the magical sound of the soprano saxophone onwards – following in the footsteps of Sidney Bechet, Johnny Hodges, Steve Lacy, John Coltrane, Wayne Shorter and Evan Parker.” The Guardian in the UK gave “Sfumato” a rare 5-star rating and called it “an exhilarating genre-hop bubbling with captivating remakes of US and European jazz traditions. An exuberant album”. And the widely-read French magazine “Télérama” wrote: “Parisien’s inventiveness and energy are nothing short of breathtaking.”

The year of 2017 also marked a new high-point for Emile Parisien’s career as a live performer. In that one year he played at festivals such as Jazz Sous Les Pommiers, Bergen Jazz Festival, Elbjazz, Jazz Baltica, Montreux Jazz Festival, Jazz à Vienne, Umbria Jazz, the London Jazz Festival and the Rheingau Musik Festival. He also appeared in the some of Europe’s finest classical concert halls: the Philharmonie in Essen, the Konzerthaus in Vienna, Hamburg’s new Elbphilharmonie and the Konzerthaus in Berlin.

A special highlight was Parisien’s residency at Jazz in Marciac, the place where Parisien’s enthusiasm for jazz had been originally been awakened as a young audience-member, and where he was invited to be Artist in Residence for 2017. Parisien’s “Sfumato” concert on 8 August 2017 was unforgettable and has been captured for ever on both CD & DVD. His quintet was augmented at this concert by illustrious guests: US trumpet star Wynton Marsalis, French jazz legend Michel Portal and Parisien’s alter ego and long-established duo partner Vincent Peirani.

Multi-layered, innovative and experimental, “Sfumato live in Marciac” is packed full of tension, excitement and turbulence. And yet is firmly grounded in jazz, brimming over with playfulness and adventures of improvisation; it is a testament to the intensity and to the magic of live jazz.