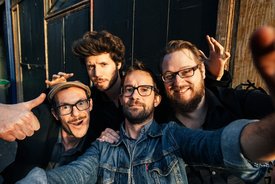 There probably isn’t another jazz musician anywhere in Europe receiving as much acclaim at the moment as French soprano saxophonist Emile Parisien. The concert recording "Sfumato Live in Marciac" (CD and DVD), with Joachim Kühn at the piano, plus guests Michel Portal, Vincent Peirani and Wynton Marsalis, was released in 2018 and was greeted with rapturous enthusiasm: "An outstanding voice in contemporary jazz", remarked ARD Parisien, and with good reason. Arte Metropolis discerned a "magician on the saxophone", The Times of London called him "Europe's leading soprano saxophonist," and for Der Spiegel, it was "a pleasure to watch Emile Parisien perform his great art". In the US, Downbeat Magazine even considered it an understatement to limit Parisien’s importance to the sphere of European jazz, while Rolling Stone magazine confirmed him not only as perhaps the best saxophonist of his generation but also as the leader one of today's most impressive bands. And this is just a sample from many such plaudits...

So it is not overstating the case to describe Parisien as an artist who is setting the direction for his instrument. In the years since Sidney Bechet, John Coltrane and Steve Lacy, no player has devoted him- or herself to the soprano saxophone as intensively or with such a propensity to innovate. No one has brought out the vital, incisive, exotic, vibrato-rich tone of the instrument with such ease, and also recalibrated it and placed it at the centre of wholly new concepts.

Parisien's new album "Double Screening" marks a return to the quartet format, and combines all of the qualities of this exceptional musician. Parisien lets jazz shine through in a way that is inimitable: he poses questions, he elaborates, he finds new answers and new ways to re-define the old. It can be visionary; it is also joyous.

Parisien is increasingly integrating elements from his homeland as he creates a whirling mix of chanson with contemporary classical music, and also with French and North African folklore. His playing radiates improvisational dynamism and originality.

He stacks up the ideas at a fast pace but concentrates on making his lines readily comprehensible to the listener. He doesn't have to overwork any single motif, because they come to him so thick and fast. He never goes the simple route, and yet the compositions, which are all by him or the band members, have rousing energy, demanding arcs of concentration, and astonishing stringency. These organized jollifications are full of unexpected feints and sudden twists and turns. The boundaries between composition and improvisation are cast to one side. The superb way in which these band members communicate with each other and avoid any sense routine is a joy to experience. This jazz is fresh, frantic and original; and it calls out for all the superlatives.

Emile Parisien's prodigious gifts as an instrumentalist are in no doubt; in fact, it is not something he ever needs to prove. When he traverses into expressive free jazz areas, then rushes through tricky melody lines at top speed, lingers over complex ideas, or makes the soprano saxophone sound for a while like a Japanese Shakuhachi flute, it always has the purpose of serving the art. And there again, it's not about just the soloist either, but rather the band which instinctively, almost dreamily steers a course between the succinct and the emotionally honest, jumping out of the rough and immediately landing in the smooth. The music is built with precision, and yet it is full of spaces for individual spontaneity. This is new European jazz that is aware of its traditions, but can also depart from them to break new ground: it’s furious, it’s virtuoso and never ceases to take the emotions by surprise.