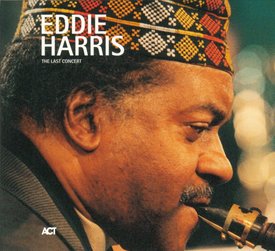 This last recording by Chicago-born multi-instrumentalist, singer, composer and arranger Eddie Harris - made eight months before his death - stands as a fitting memorial to his 40-year career in jazz and will hopefully spark a long-overdue reappraisal of his work and secure for him, albeit posthumously, something like the level of recognition he deserves.

With backing from what is, without doubt, one of the most spirited and accomplished ensembles in jazz -  the WDR Big Band - Harris delivers characteristically energetic and individualistic interpretations of some of the great jazz and soul standards of the past 40 years, playing with the tremendous fire and fervour of a man who was perhaps aware that he was probably delivering his last musical testament - in the same way as Stan Getz did in the months before his death. British musician and writer Ian Carr made a most perspective comment on Harris when he wrote "As a result of the prejudice against Harris, he has rarely, if ever, received any serious attention, only the dismissive variety." Harris was a genuine original whose accomplishments as an innovative and creative jazz musician were consistently underrated.

The first mistake Harris made was to achieve a massive hit with his debut recording; the second was developing a passion for experimentation, and the third was his flirtation with rock and funk music.

Born in Chicago on October 20, 1934 (or 1936 according to which reference book you consult), Eddie Harris studied music at the DuSable High School, switching from vibraphone to clarinet and then to tenor saxophone, and made his professional debut as a pianist, playing a one-nighter with saxophonist Gene Ammons.

After his military service, during which he toured France and Germany with the 7th Army Symphony Orchestra, he made his recording debut for the Vee Jay label on January 17,  1961. The album, "Exodus To Jazz", included the Ernest Gold theme from the Otto Preminger biblical movie, "Exodus" which, released as a single, enjoyed three weeks the Billboard Top 40 in May 1961, reached the No. 36 spot and eventually sold more than two million copies. Over the next three years Harris made six more albums for Vee Jay and established himself as a stylish, straight-ahead, boppish tenor saxophonist and a gifted composer of original themes.

But the critical acclaim he merited continued to elude him. In an interview I did with him in 1969 he told me that of the 30 albums he had made up to that point, only five had failed to sell well, and he added: "I figure that I’m put down because I sell a lot of records." And it was not without significance that an album he recorded for Timeless in 1986 was titled "Eddie Who?" With the exception of the final track, all the music on this album comes from a live concert performed on the eve of the studio session which produced the companion album to this CD - "Bernard Purdie’s Soul To Jazz" (ACT 9242-2) - and the WDR Big Band and guest musicians play with uninhibited élan and enthusiasm, communicating their enjoyment of the music exuberantly to the audience. There is a great deal of noteworthy solo work by the guest musicians and the WDRBB sidemen, but the album unquestionably belongs to Eddie Harris. The programme opens with Lee Morgan’s 1963 hit, "Sidewinder", a densely textured arrangement by Gil Goldstein with outstanding solos by Eddie Harris and Frank Chastenier.

Eddie Harris first recorded "Freedom Jazz Dance" in 1965 but it was the Miles Davis version on the "Miles Smiles" album which really gave the composition hit status, since when there have been more than 40 other recorded versions. This is a one-chord piece, arranged by Arif Mardin, whose melody uses fourth intervals most effectively and Harris turns in a bravura performance.

Nat Adderley’s "Work Song", another great jazz standard, was first recorded by Cannonball Adderley in 1960. Here it is performed by a small group - Harris, Landgren, Goldstein, Dean Brown, Dave King and Bernard Purdie. The piece is taken at an infectious, rocking tempo with an emphatic back beat at Harris, producing a whistling effect through his synthesized saxophone, contributes a storming solo.

"When A Man Loves A Woman", which Percy Sledge made into a No. 1 hit in 1966, is a Tom Malone arrangement which showcases the powerful vocal talent of Haywood J. Gregory Jr. and also finds Harris once again soloing in top form.

"Gimme Some Lovin’ " the Spencer Davis/Steve Winwood hit from 1967, here sung by Gregory, recalls the album Eddie Harris made in 1973 with Steve Winwood and other British rock musicians. Harris has an extended work-out here, developing an irresistible groove as he solos on one chord.

The return of the small group, with solos from Landgren and Harris and the final selection features Eddie and Gil Goldstein in a yearning, poignant duo version of Harris’s appealing ballad, "You Stole My Heart", which first recorded in the mid-eighties. This piece was recorded in the studio after the Bernard Purdie session. Eddie delivers an immensely soulful vocal, with sensitive accompaniment from Goldstein, and then plays a truly moving tenor solo which, with its eloquent, preaching understatement is, for me, the highlight of the entire album. This is Harris recalling the days of his jazz apprenticeship in the Fifties when he played piano and sang with gospel groups in Baptist churches in and around Chicago.