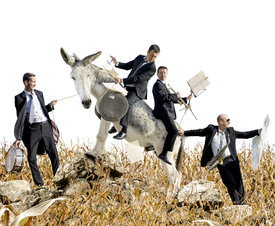 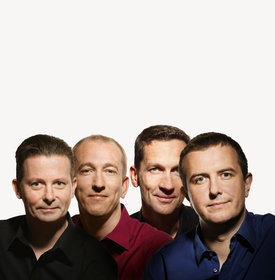 Produced by Echoes of Swing Productions

Most jazz musicians are also travellers. Their places of work are the clubs and festivals of the world, so they are always on the go. Echoes of Swing, however, has another dimension: This quartet is also on a journey through time, going back to classic jazz from the 20’s to the 50’s, bringing it into the present day and shaping it for the future. This “tour de force” has been going on for 20 years. A reason then to celebrate, which is perhaps best done by re-tracing the journey, reviving memories of things experienced, and looking at all that travelling involves.

We’re off on a thrilling round-the-world musical journey from the moment Chris Hopkins’ “Orient Express” rolls in. The wagons are full of sounds which range from blues to Arabic music, and as we move along the track, we’re noticing all kinds of shifting harmonies and tempo changes. Right from the point of departure there is a buzz about what might happen next: a pirate ship in a storm in 12/8 time with Bernd Lhotzky's “Das Wrack Der Guten Hoffnung”, then it’s off to the South Seas, where Chris Hopkin's “Fiji Hula Bula” creates a relaxed vacationing mood, and then to Sidney Bechet's “Southern Sunset”, which in this Echoes version transports us to restless, sultry nights; then a fast-paced swinging excursion to Colin Dawson's English homeland follows in “Gan Hyem”, with Coleman Hawkins’ “Disorder At The Border” as a classic bebop blues to make us forget the Brexit woes.

Sometimes we’re on the racetrack in a vintage car (“En Auto”) in Bernd Lhotzky’s homage to early ragtime-linked novelty piano japes, at other times it can be classic and dramatic, as in “Cabin In The Sky”. And what better way to illustrate flying than with the Italian hit “Volare”, when Bernd Lhotzky transforms the tune into a carefree glide floating on the wings of Harlem Stride, very reminiscent of the John Kirby sextet.

The whole panoply of impressions that one has on a voyage is translated into music in “Travelin‘”. Numerous original compositions and complex arrangements, with pieces originally for solo or orchestra are adapted for the quartet, testifying a profound knowledge of the history of music, and there is not a single bar which fails to deliver exquisite taste.

Sophisticated, yes and intellectually thoughtful, but the imperative of old school jazz to entertain is never forgotten. Like all their previous albums, “Travelin'” is full of fine humour, whether it's amusing musical quotations, the subtle ironic undertone in Colin Dawson's vocals, or wacky titles like “On A Slow Goat Through China” - Chris Hopkins’ allusion to the Frank Loesser standard.

For “Travelin‘”, the words which the great Dick Hyman, the last living giant of classic jazz piano, once said about the Echoes of Swing are as true as they ever were: “Each of their pieces is a gem! Collectively they present an approach to jazz like no other quartet, while individually each player is a master.”

So, it’s all aboard and indeed the best proof yet that travelling does indeed expand one’s horizons. After twenty years on the road, this ensemble has wagon-loads of style, elegance, finesse, improvisation and humour - and has honed all of these to perfection.