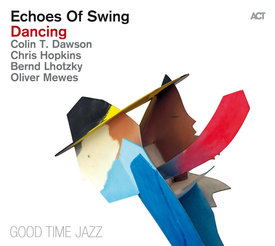 Early jazz was first and foremost dance music, a fact which is all too easily forgotten these days. As each new dance craze arrived on the scene – from Charleston andRagtime, through Foxtrot and Lindy-hop, and then on to Jive – the development of jazz music moved along with it. Only later, beginning with ‘Swing’ and ‘Bebop’ was jazz finally established as music for the concert hall. The quartet ‘Echoes of Swing’ have put a clear marker down with their latest album ‘Dancing’. This band has been at the crossroads of such currents and developments for many years now. The pianist Bernd Lhotzky, alto saxophone player Chris Hopkins (aside the ‘Echoes’, like Lhotzky, a world class ‘stride’ pianist), the trumpet player (and vocalist) Colin Dawson and drummer Oliver Mewes are however, certainly anything else than a ‘dance band’, and although they have their roots in classic jazz, they have nothing in common with ‘retro’ trends or ‘neo-swing’. With their zeal for the unrivalled exhaustless – and unexhausted harmonic and melodic wealth of material, they bring the music itself to a merry dance.

The album ‘Dancing’ is more an anthology which takes a wry look at the theme of dance in jazz, occasionally heading off at a tangent, and making some very surprising connections. This is a waltz through the history of jazz. As demonstrated by other ACT colleagues such as Joachim Kühn or liro Rantala, it begins at the very beginning with Johann Sebastian Bach. A Gavotte from the English suite No. 6, a baroque dance, is transformed into a melodic platform for an effervescent drum feature. A journey through Scott Joplin’s ‘Ragtime Dance’, James P. Johnson’s ‘Charleston’, Cole Porter’s ‘Dream Dancing’, or Sidney Bechet’s ‘Premier Bal’ to Pixinguinha’s Brasilian Choro ‘Diplomata’, Bernd Lhotzky’s Cuban Bolero ‘Salir a la Luz’ or the exotic Ellington-like timbre of ‘Ballet Of The Dunes’ from Chris Hopkins.

This is dance in jazz, but not as we know it. For a start, a third of the tracks are original compositions (more than on any other ‘Echoes Of Swing’ album) from Lhotzky, Hopkins and Dawson.As a group, the four maestros have taken the other selections and have created something discretely and entirely original. Nothing here is re-enacted. Chris Hopkins’ work on the Rodgers/Hart standard ‘Dancing On The Ceiling’ has, by using clever rhythmical displacements and audacious interwoven voicings, rendered it an almost completely new tune.

‘More than ever, this album is a cooperative team effort’ explains Lhotzky, we see ourselves not so much as four soloists, but more importantly an ensemble.

A Team that has been performing continually for nearly 20 years, no wonder then that ‘Echoes Of Swing’ have found their own distinctive sound which has made this exceptional band the sensation at countless concerts and festivals, including the USA, the home of jazz. Recently they have been bestowed with many tributes, from the ‘German critics award’ to the French ‘Prix de l'Académie du Jazz’.

What the musical signature of ‘Echoes Of Swing’ consists of, can be heard on ‘Dancing’ more explicitly than ever: Highly intelligent arrangements to solos and ensemble work presented from a formation which is indeed unique in jazz: Piano, Drums and two horns. And while the four master soloists play, each one of them a rare specialist in the art of earlier jazz styles, the music is brought up to the present day, now possessing  a new ‘hipness’. Flawless musicianship, a comprehensive knowledge of music history, good taste and judgement, and a sly sense of humour. For music cognoscenti, there are a myriad of subtle sleights of hand and hidden gags to enjoy. The Gavotte from Bach’s sixth English Suite has been framed with the B-A-C-H motif; the Charleston has been 'straightened out' into a modern jazz waltz; and the whirling wildness of the ‘Carioca’ is put through some challenging changes in tempo, which reminds one of the celebrated film scene with Fred Astaire and Ginger Rogers. The couple briefly collide but quickly pick up the original tempo and dance on, slightly the worse for wear.

Each of the tracks of ‘Dancing’ communicates simultaneously and directly with the brain, the emotions, and down to your feet. There is quite simply a very wide range of delights for the listener to enjoy and find their favourites, be it in ‘Echoes’ moving interpretation of Sidney Bechet’s shimmering but melancholy melody ‘Premier Bal’, or Dawson’s swinging ‘Sandancer’, the title being a word-play and tribute to the sandy beaches of his home town in north-east England. You can almost hear the dancers swishing about on the sand covered floor. Or perhaps in Lhotzky’s debonair and elegant tribute to Willie ‘the lion’ Smith, the larger-than-life pianist and componist, who reportedly was also a fabulous dancer. Indeed, listening to 'Dancing', a quick spin around the room (if so inclined) doesn't have to be ruled out. Take the dusted-down, minimalist-style on ‘Moonlight Serenade’. It's not hard to imagine a solitary couple lured out onto a moonlit terrace….