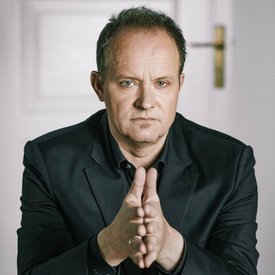 Dieter Ilg is among the leading jazz bassists in the world. An exceptionally gifted player, he has, for example, worked with Randy Brecker, Charlie Mariano, and the Mangelsdorff/Dauner Quintet, and also currently has a duo with Till Brönner. However, it is above all his own projects that have defined him. In these he has explored his classical roots and transferred them into jazz with intent, thoroughness and consistency. In 2009 he formed a trio with pianist Rainer Böhm and drummer Patrice Héral, and together they fulfilled Ilg's long-cherished wish to re-conceive Guiseppe Verdi’s “Otello” according to his own musical conception of the work.

He took a very different route from the over-mechanistic “third stream” of the 60s and 70s. He also avoided the kind of arrangement by which classical music was shrink-wrapped for the swing or pop markets. His ventures, loved by audiences and critics alike, are a freewheeling and completely convincing combination of the melodies and structures of classical music with the rhythmic and harmonic free spirit of jazz. The success of this first project stemmed from a winning combination of factors: meticulous preparation, a compelling creative vision and a trio that played together until everything they played became second nature. Armed with the right formula, Ilg then addressed Wagner’s “Parsifal”, followed by “Mein Beethoven”. He received an ECHO Jazz award for all of these three albums, and earned praise from critics, including the Süddeutsche Zeitung. Their critic wrote that Ilg had managed to get “difficult old Beethoven singing and swinging in a way that nobody had done before.”

And now he continues with “B-A-C-H”. Ilg’s focus is J.S. Bach, the mighty creative force of the baroque era, whose compositions would determine the subsequent course of western classical music. Bach also set in motion the rediscovery of classical music through jazz, notably with Jacques Loussier. For many jazz musicians, Bach serves as a base camp for explorations of classical music, but Dieter Ilg has preferred to make him wait his turn. “Perhaps it’s because I enjoy putting the cart before the horse,” he quips. “Some people don’t believe it, but Bach is no actually easier to adapt than, say, Beethoven. It is simply another process, but it's firmly based on what we developed in our earlier adaptations.”

Ilg grew up in a family of amateur classical musicians, and became familiar with Bach’s music from a very early age. Violin practice loomed large for him as a young boy, as did playing in a lot of masses in churches: “It’s the typical background for someone who has grown up in Germany and had his practical musical strengths forged in the furnace of both normal school and music school lessons,” Ilg grins. He pursued his studies at the Musikhochschule in Freiburg, from which he graduated on the classical double bass. He developed a particular fondness for the Casals versions of the solo cello suites of Bach, and also “for a while” for Glenn Gould’s recording of the Goldberg Variations. “Sometimes the mathematical genius side of Bach can be a turn-off; it was sometimes the case for me,” he admits. So what is both surprising and also totally convincing is the way the music hovers and luxuriates in the beauty of Bach’s melodies, and how a musical story can suddenly emerge out of these ‘pure’ structures. The points where Ilg as a jazz musician has felt himself the most at one with Bach was right at the cusp where the compositions themselves are suggesting variation and improvisation. Here, Ilg’s well-honed method took over: after a period of dedicated listening, he selected the repertoire they were going to play from Bach’s great oeuvre, wrote out the leadsheets, and then they played together, permitting each of the musicians to bring his ideas to the table. “All three of us is prepared to take risks, but each also knows he can completely trust the others. Musically as well as on a human level that is something very significant.” That group dynamic, and just as Ilg describes it, can be heard clearly on this new recording.

In his selection from Bach’s works, Ilg has not confined himself to the familiar. “Air” and “Siciliano” are the only two tracks on the album with the status of “hits”. There are four Goldberg Variations and two Preludes from the Clavierbüchlein for Wilhelm Friedemann Bach “which every piano student knows. They were also the very first pieces I played on the piano, and they never leave you,” says Ilg. During his period of listening, pieces which seemed to leap up at him were the Harpsichord Concerto BWV1052 and the “Sarabande”, “which” says Ilg, “was ideal to make a song from.” The delicate tracery of Héral’s drumming seems to find its way of its own accord, whereas Ilg and Böhm – either solo or in unison, but always as equals – address the harmonic and rhythmic forms and spontaneously make something new from them. Ilg, once again, has taken the work of an old master and made it sound new and fresh. “B-A-C-H” has a depth about it, and yet is completely approachable.